"Using MathWorks tools for Model-Based Design, we simulated not only our control algorithms but also the physical hardware. By automatically generating code for the control software and the test bench, we reduced development time and implemented changes quickly. We visualized simulation and test results, which gave us confidence in the design that we ultimately deployed." 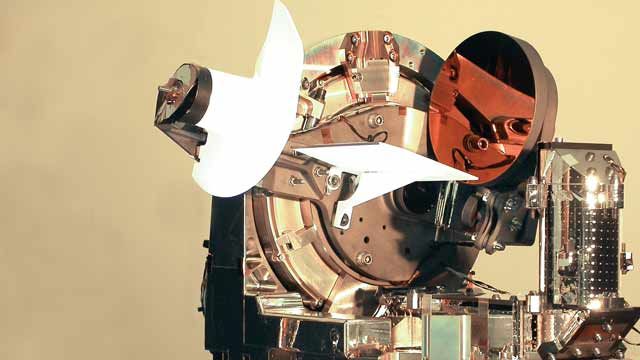 Until recently, laser optical links for high-bandwidth satellite transmissions were limited to satellite-to-satellite communication. To establish such a link with an aircraft, engineers had to contend with the distortion and attenuation of the signal by the atmosphere and by the movement and vibrations of the aircraft.

Astrium, a wholly owned subsidiary of EADS, developed LOLA, a two-way laser optical link between an airborne aircraft and the Artemis geostationary satellite capable of 50 megabits-per-second transmission with an error rate of less than one error bit per billion.

Astrium reduced control development and validation time by using MathWorks tools for Model-Based Design, an approach that was already well-established within the organization.

"We use Model-Based Design regularly for timed simulations and modeling spacecraft dynamics," explains David Gendre, pointing development engineer at Astrium. "On this project, we used Simulink, Simulink Coder, and Simulink Real-Time to develop a control system model and a physical model of the pointing hardware. We used these models for continuous functional verification and to generate code for hardware-in-the-loop tests and the real-time demonstration system used in flight tests."

Astrium’s system had to control and dampen the aircraft’s high-frequency vibrations as well as its roll, pitch, and yaw. It also had to track the laser beam despite the disturbances and distortion caused by the atmosphere.

Based on input from an inertial measurement unit, an active pixel sensor, and a GPS receiver, the control system used actuators to adjust the azimuth and elevation of the telescope for larger-scale control and to adjust a pointing mirror along two axes for fine-grain control.

When Astrium carried out the first tests with real hardware, only the fine-tuning components were available. As a result, for verification they needed to model, simulate, and generate code for a large portion of the physical system in addition to the control system.

Astrium conducted flight tests to measure vibration in the aircraft and pitch, roll, and yaw angle variations. MATLAB® and Optimization Toolbox™ were used to process the measurement data as input to the control system model.

They divided the project into two parallel efforts, with one group using Simulink® to design and model the control system and a second using Simulink to model the mechanics of the telescope pointing hardware and the behavior of the active pixel sensor. The Simulink models enabled the teams to communicate design decisions throughout development.

After running time- and frequency-domain simulations in Simulink to verify the functionality and stability of the control system, the engineers used Simulink Coder™ to generate code for the control software and the physical model. They then conducted a second, avionic validation phase using HIL tests, with the control system operating on a combination of actual hardware (for the fine-control pointing) and simulated hardware (for the larger-scale pointing).

Throughout development, MathWorks tools facilitated concurrent engineering, with software engineers in charge of managing the real-time constraints of the control system as well as developing functions such as image processing and specific hardware drivers. “These functions were easily embedded into S-functions in the Simulink model,” explains Gendre.

The engineers used Simulink Real-Time™ to deploy a fully functional, real-time version of the system on a PC designed for flight tests.