⋮
After the set(I,'AlphaData',alpha); command, I get the following error message:
"Warning: Error creating or updating Image
Error in value of property AlphaData
Array is wrong shape or size"
The background image fully suppreses the foreground image with this method, it does not work.

⋮
Edited: DGM on 9 Aug 2022
Ran in:
Pay attention to what is actually being performed by this example. Two images are being composited using the alpha content of the foreground image. If your image file has no alpha content, then alpha will be an empty array, hence the mismatched array size error.
Let's disregard the error for a moment. Conceptually speaking, if the foreground has no alpha content, then it should be expected that it is treated as if opaque. If you're loading an image with no alpha content and expecting it to be rendered with some wholly unspecified alpha that neither I nor MATLAB can guess on your behalf, then you will be disappointed.
If you want some scalar opacity, then set alpha to a scalar.
ax1 = axes('Parent',gcf);
ax2 = axes('Parent',gcf);
set(ax1,'Visible','off');
set(ax2,'Visible','off');
bg = imread('peppers.png');
fg = flipdim(bg,2);
hi = imshow(fg,'Parent',ax2);
set(hi,'AlphaData',0.5);
imshow(bg,'Parent',ax1); 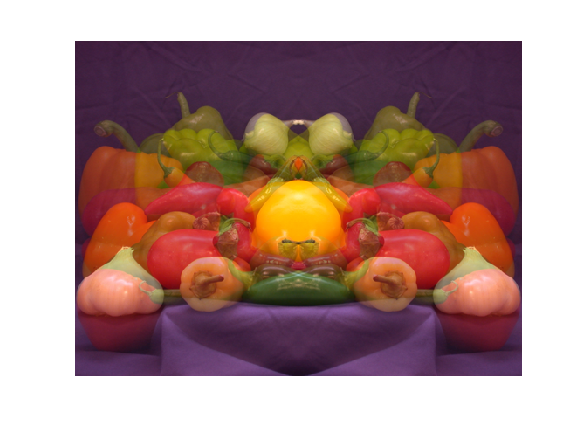 This should work in R2013a and earlier. I tested this in R2009b.
That said, I doubt anyone replying is using R2013a or older. If you aren't using a version that old, then this entire thread is not relevant to your needs. In contemporary versions, image objects can be stacked in a common axes just like other objects. There's no need for the workaround that is the focus of this thread; just stack the images and set the alpha.
bg = imread('peppers.png');
fg = flip(bg,2);
imshow('peppers.png'); hold on;
hi = imshow(fg);
set(hi,'AlphaData',0.5);

In either case, if your goal is to actually composite images for output to an image file, then using figures as an ad-hoc compositor is a bad idea in any version. If you want to composite images with associated alpha content or scalar opacity, then composite the images directly and save them with imwrite() instead of saving a screenshot of a figure.
These answers should serve as an introduction to basic compositing with and without third-party tools.
https://www.mathworks.com/matlabcentral/answers/890417-i-want-to-remove-black-color-from-my-image-and-make-the-background-transparent-so-that-i-can-paste-i
https://www.mathworks.com/matlabcentral/answers/1723310-masking-multiple-parts-of-image

⋮
https://in.mathworks.com/matlabcentral/answers/1805110-how-to-display-an-imagesc-plot-and-mapshow-plot-with-same-geographic-direction
please comment on this
@DGM
thanks in advanced

No tags entered yet.