Unable to get similar contour using the gridfit

sanjeet on 21 Aug 2015
⋮
Answered: John D'Errico on 19 Sep 2015
Accepted Answer: Kelly Kearney
I am trying to plot countour filled for the data- i got a contour using the tri-contour- gives lines,
tri = delaunay(y1,z1); %A 2-D Delaunay triangulation ensures that the circumcircle associated with each triangle contains no other point in its interior
tricontour(tri,y1,z1,log10(mass2*1e6),contourlevel); 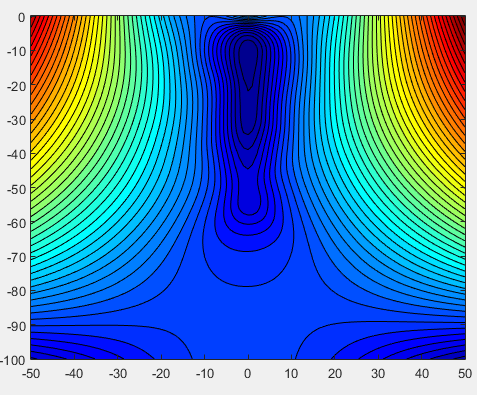 Kelly Kearney on 24 Aug 2015
⋮
Gridfit isn't really appropriate for extrapolation, and if you use it for that you often get surfaces that increase/decrease sharply outside of your data domain. That's what's happening here, since you apply the surface-fitting to a region much larger than that of your data. I'd trim off anything that extends beyond the convex hull of your input data prior to contouring. I'd also be careful using the 'nearest' option in gridfit; the documentation mentions that this will rarely be the best option.
x_node = linspace(min(y1), max(y1), 100);
y_node = linspace(min(z1), max(z1), 100);
[zg,xg,yg] = gridfit(y1,z1,(log10(mass2*1e6)),x_node,y_node);
k = convhull(x,y);
isin = inpolygon(xg, yg, x(k), y(k));
zg(~isin) = NaN;
contourf(xg,yg,zg);

⋮
Dear Kelly,
I got the folllowing result based on your advice,

The polygon shape is not close to the spray area(smooth ellipse in actual) I need the countour to be similar to the actual distribution area as follows: 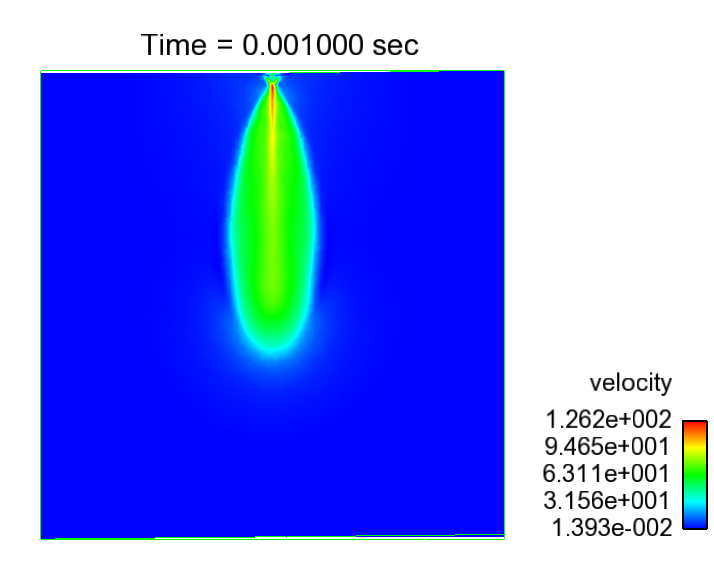 ⋮
The polygon shape you're seeing right now is based on the convex hull of your data points. If you want something different, you're going to have to find the appropriate way to calculate the boundary, and use that to mask your data (which is what I did with the convhull, inpolygon lines of the above code). Perhaps a bounding ellipse, perhaps something based on point density, etc. But at this point, you know your data and your final output requirements better than I do, so I can't help much.

⋮
I have updated points x and y for covexhull() , but the polygon shpae is not as per the distribution of points its more regular.
Is there way to change the convexhull output as more spray like

John D'Errico on 19 Sep 2015
⋮
I just saw this question. I'll add a few comments as the author of gridfit, but I've already upvoted Kelly's response. I could have just put what I have to say in as a comment, but I hope that some of what I can say is worth reading, and might be easier to notice as an answer.
Gridfit will extrapolate to the limits of the nodes you give it. It attempts to do so smoothly. A delaunay based approach will only interpolate within the convex hull of the points. You cannot rationally expect them to yield the same results. Both methods are useful, valuable, and important, though usually on different problems.
Note that gridfit does have several methods for your use. Those who try to build a surface that may involve a great deal of extrapolation as it appears here, may do better with the 'springs' option for the regularizer in gridfit. That option was designed to be less aggressive about extrapolation. The fact is however, extrapolation over long distances is a terribly poor idea in general.
A method that works only on a convex hull cannot extrapolate well. As well, when your data is not fully convex, expect to see problems. Typically, one sees large triangles around the edges of the domain when the data is not convex. Then you should expect to see poor interpolation characteristics in those regions.
What is best is to understand every method one might use, and know when to use one tool or another. A good workman understands all of the tools in their toolbox, and knows when to use each of them to best advantage.