How to edit font size of Simulink dashboard blocks?

EP on 19 Dec 2017
⋮
Commented: Dharaneedharan Arumugam on 17 Dec 2020
I'm using Dashboard blocks in my Simulink model which has been really helpful for making a nice user interface. However, the size of the text (of both the content and the block label) is very small and hard to read. When I zoom in to try and magnify it, the text seems to auto-adjust so that the size remains constant despite the zoom, as seen in the below image (the right screenshot is the same Dashboard block after zooming in). 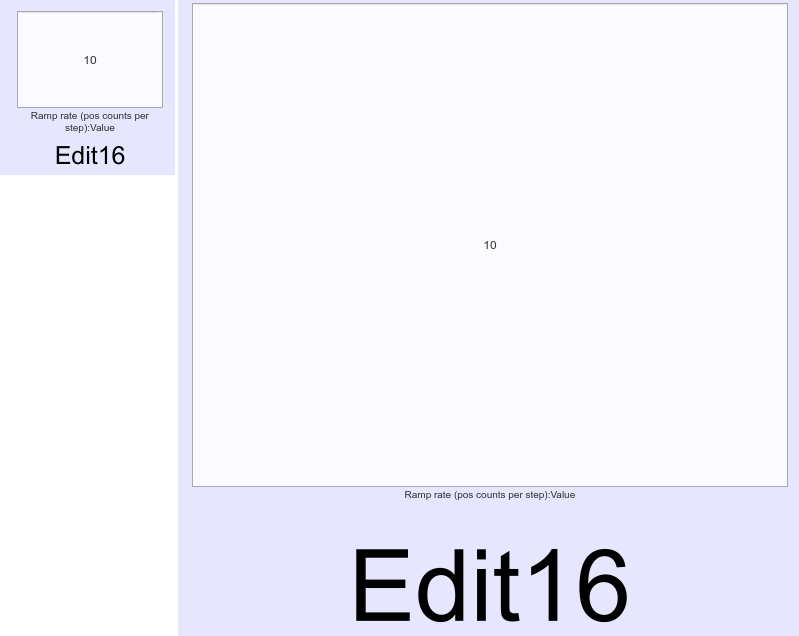 Right-clicking and going to Format > Font Style for Selection only modifies the standard block label (the large "Edit16" text seen in the above image).
Is there a setting somewhere to control the font size of the Dashboard block text itself?

⋮
I'm having the same exact issue in the 2020a version, however, it's even worse since screen resolution has improved over the last couple years. All the engineers using the dashboard blocks need to sit <12inches away from the screen to read the data.
Can we please fix/solve this Mathworks?

Rob Brecher on 16 Dec 2020
⋮
Hi Garrett,
From the screenshot you originally provided, it looks like you were using the Edit block to add a user interface to your Simulink model and running into issues with font sizes. You're correct that in older versions of Simulink adjusting font size for Dashboard blocks was not supported.
In 2018a or later, you should be able to adjust the font size of most dashboard blocks by right-clicking on the block and selecting Format > Font Style for Selection, or by selecting the block and using the Format tab at the top of the Simulink window. Here's an example: 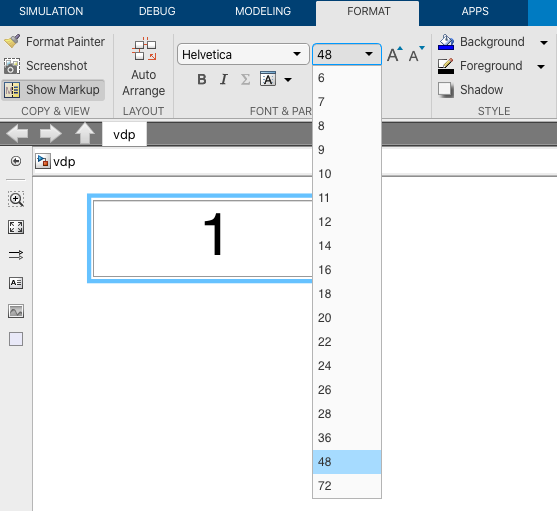 In addition, development has been working on the scaling issue you also mentioned, and in an upcoming release (likely to be 2021a) the behavior should match what you're expecting, where the font size of the Dashboard block increases with the zoom level of the Simulink editor.
In fact, there are a number of enhancements to Dashboard blocks that have been shipped as part of the 2021a prerelease, and should be available when 2021a is released to the general public. If you're interested, you can read about them in the 2021a prerelease notes (mentioned on page 1-7):
https://www.mathworks.com/content/dam/mathworks/mathworks-dot-com/products/new_products/r2021a-prerelease-release-notes.pdf?s_v1=35882&elqem=3306155_EM_WW_DIR_20-12_R2021a-PRERELEASE-GENERAL-TAH
Thanks for the feedback on the Dashboard blocks!

⋮
Edited: BG on 16 Dec 2020
Thank you Rob,
For me, i'm using 2020b and I have been facing the same issue with the auto-adjusting while zooming in and out.

⋮
Hi BG,
Not sure if this will help, but there's another relatively new feature added that was added in 19b you might be interested in:
https://www.mathworks.com/help/simulink/ug/interactively-debug-your-models-using-panels.html
You can add a collection of Dashboard blocks to a panel by marquee selecting them and choosing "Promote to Panel" from the "..." menu that appears next to your selection. Once a Dashboard block has been added to a panel, its size should remain consistent even when the zoom level of the Simulink editor is changed.
As a side note, resizing the panel by dragging from its corners will scale the contained Dashboard blocks in a similar manner to how you've described above, but editor zoom level shouldn't affect this.
Another feature of the panel is that it will continue to be visible as you navigate through the model, for example into a different subsystem or even a Stateflow chart. Panels may also be double-clicked to be minimized, so they're only taking up screen real estate when you need them to.
Hope that helps!
Thanks,
Rob

⋮
Is there anyway to implement the same in 2016b ?