Hi. Is it possible to code an image crop then proceeds to block matching and finally run a newton rhapson power flow method?

⋮
how does power flow fit here ? Are you trying to recognize the image of power setup and then compute the power flow for it?

⋮
Yes, I need to know the object that was removed even if it is only a portion of that part and run power flow after it. Here is the sample. Thank you for your reply!

⋮
is there a complete set of original images available or do you need to be able to analyze from arbitrary images ?

⋮
There is a standard image to be used. Just like the first picture "Original gray scale image".

⋮
You could convert the original grayscale to RGB and then find the difference between that and the second image, and test that against a threshold. (If you are using jpeg images then watch out for false positives due to jpeg artifacts.)

⋮
what treshold can i use to determine that the whole circle was selected. Or in other case, the line was removed even if I only selected only a portion of the line. 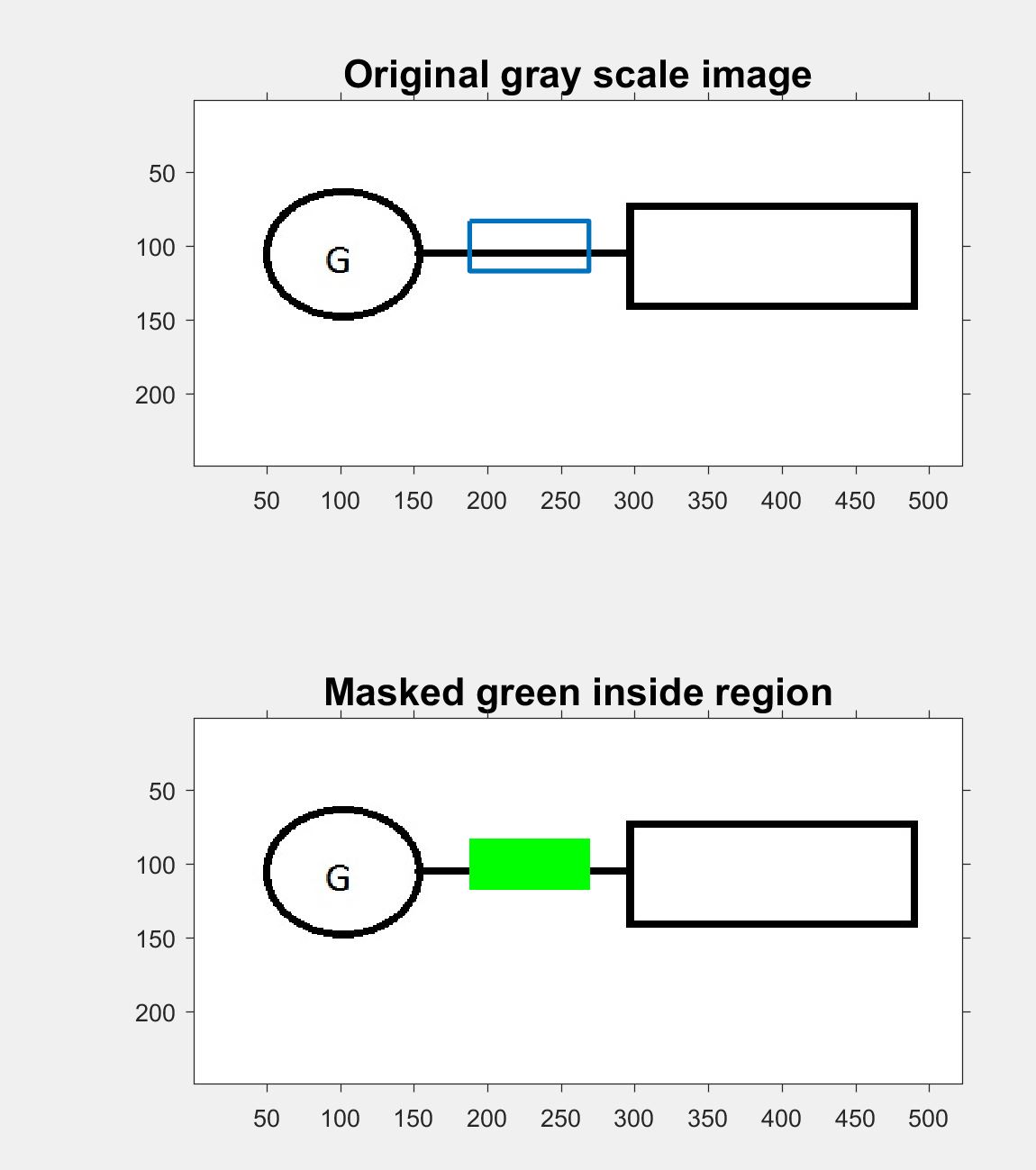 ⋮
The reason for having a threshold at all for the "test that against a threshold" I mentioned above, is that there could be a small bit of noise in the image, especially if you use JPEG, as appears to be the case. You can experiment a bit. In tests I have done in the past, I have found that along the edge of dark lines, anti-aliasing changes of about 32 out of 256 are just starting to become noticable, so the threshold might end up being a bit higher than you expect. You can experiment.
But that threshold does not give you any information about how much of a circle is filled in, or a line is blocked: that earlier threshold has to do with how much an individual pixel has to change in brightness before you are willing to say that it has changed enough to be worth paying attention to.
You need a mask for each different object that includes only the parts occupied by the individual object. Then you can check to see how many pixels were significantly changed for each object, and make decisions on that basis. You will need to make decisions: for example if someone carefully fills in the center of a circle but does not touch the black edge, then what is intended to be implied?
If the user puts a single-pixel wide green streak through a line, then is that enough to declare that the line has been cut? If not then how wide is needed to make that declaration?

⋮
Yes. Even if it is a single-pixel green line, it can be considered as cut. Also, I need to limit the cutting for 1 component only (be it a line, a circle, or a rectangle but it only limits to 1 component only)

⋮
im really having a hard time on assigning the series of mask for the given components.

⋮
Can I just assign variables in the matrix coordinate of each line so that when the value of it changes, I can determine where the cut was made. If yes, how? Thanks!

⋮
I suggest that you use something like imfreehand to create roi, using the createMask() method to create the appropriate masks for components.

⋮
Can I use it to have a loop statement regarding the change in values of the mask portion of the components (when some of the mas portion was removed)?

⋮
"Can I use it to have a loop statement regarding the change in values of the mask portion of the components (when some of the mas portion was removed)? "
Yes, if you can find some meaning for that statement; I am having difficulty understanding that, though.
"Can I just assign variables in the matrix coordinate of each line so that when the value of it changes, I can determine where the cut was made. If yes, how? "
It is possible to define a matrix in which each location stores the component number associated with a location in the image. Then you could take
changed_components = component_label_matrix(big_change);
That is certainly possible. However, it would require that you find some way to construct the matrix in which each pixel is the corresponding component number. You could construct it by a number of assignment statements after you had done careful analysis of the image, I suppose. But in my experience it is much easier to use imfreehand() or related routines to overlay an ROI on an image to create mask matrices. But if you had your heart set on a single label matrix then you could certainly create one, such as by using find() on the mask matrices created by overlaying ROIs.

Walter Roberson on 15 Nov 2018
⋮
if size(original_image,3) == 1
original_image = original_image(:,:,[1 1 1]); %convert to RGB
end
img_diff = sum((double(original_image)-double(new_image)).^2,3);
big_change = img_diff > SomeThreshold;
for K = 1 : number_of_components
num_changed_in_component(K) = nnz( mask_for_component{K} & big_change );
end
That is, you would create a series of logical masks, one for each important component, each one true where a component is in the original image, and you would calculate the number of points significantly changed in that component. That would permit you to figure out which components had been affected and how much. For example you should be able to estimate that about half of the circle was changed and change the value associated with the component appropriately.
... Watch out for the possibility that the change in the image disconnects the circuit: you could end up with equations that generate singularities.

⋮
How can I know the number of points significantly changed in that component?

⋮
num_changed_in_component(K)
where K is the index of the component . That is, that is what the code calculates already .