next prime number using While loops

Xenium Adil on 9 Apr 2019
⋮
Commented: Jan on 1 Feb 2023 at 0:45
Accepted Answer: John D'Errico
We have to write a function called next_prime that takes a scalar positive integer input n. Use a while-loop to find and return k, the smallest prime number that is greater than n. we may use isprime function. plz help.. 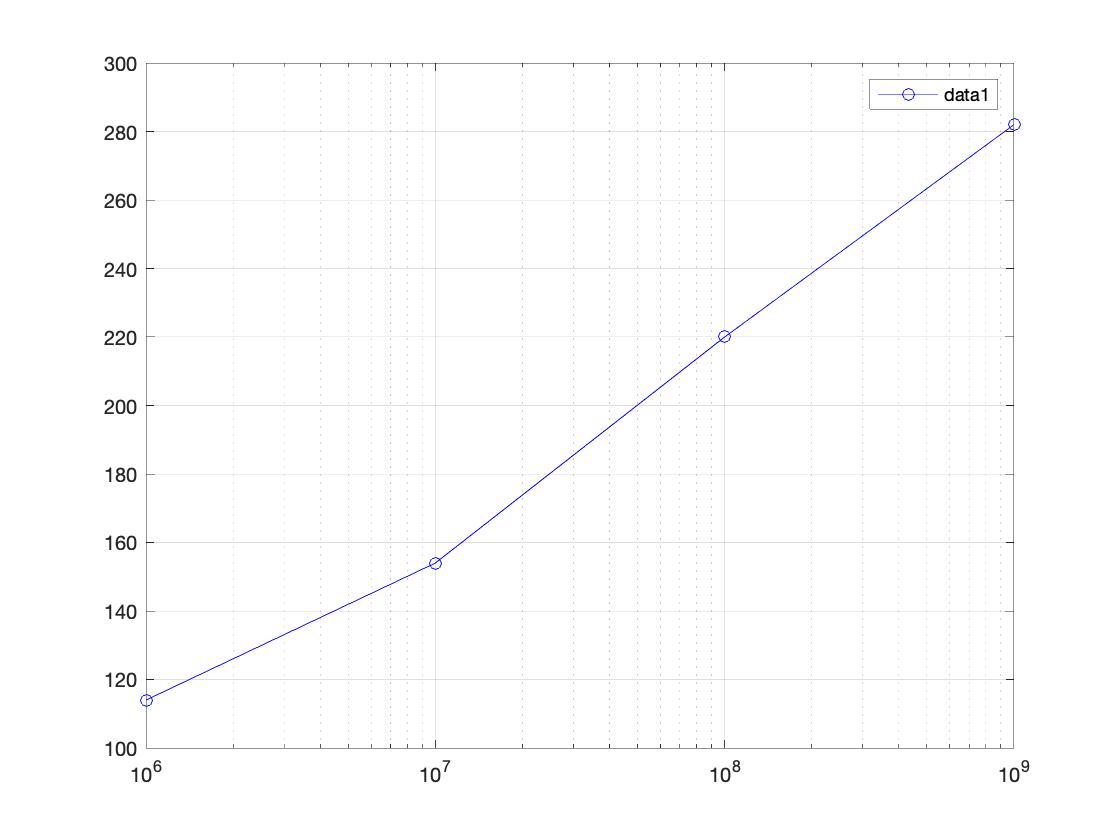 I'll just fit a linear polynomial to it, as:
interprimepoly = polyfit([6 7 8 9],[114 154 220 282],1)
interprimepoly =
57 -235
This will be adequate for an extrapolation, since I don't care if it is only wildly approximate.
polyval(interprimepoly,[13, 100000])
ans =
506 5699765
As such, out in the vicinity of 1e13, we may possibly be pushed to test several hundred numbers to see if they are prime. If we can intelligently exclude perhaps 90% of those tests, then we can cut the time required by up to 90%.
Further out, looking at numbers with tens or hundreds of thousands of decimal digits, the importance of avoiding millions of calls to isprime will be quite significant.

⋮
@John D'Errico: Beside the above mentioned problem, your method can be improved:
while true
if ~all(rem(N, partialsieve))
elseif isprime(N)
break
end
N = N + 2;
end
If partialsieve are the primes(1000), using this as test is cheaper than calling isprime(N), where primes(sqrt(N)) is calculated and tested. But here we can exploit 2 two details:
The solution is to join both parts and omit the vectorization, but test the values in a loop. Then the smaller prime factors are found earlier:
% Just as demonstration - !!! NOT WORKING !!!
p = primes(sqrt(N));
np = numel(p);
while true
isp = 1; % Assume N is a prime at first
for ip = 2:np % Omit the leading p(1)==2, because we process odd values only
if rem(N, p(ip)) == 0
isp = 0; % N is divisable by p(ip)
break;
end
end
if isp, return; end % N is a prime
N = N + 2;
end
This is faster than creating the temporary vector in ~all(rem(N, partialsieve)) and in some cases inside isprime again as ~all(rem(N, primes(sqrt(N))). The loop outperforms the vectorized method, because it stops soon usually.
The problem of this method is, that p is determined before the loop, but N is growing and requires more primes to be tested exhaustively. To handle this, p must be larger: primes(sqrt(N + M)) with a sufficient M. And if floor(sqrt(N)) > p(end), p must be updated accordingly. My tests with primes(sqrt(N * 1.1)) are promissing.

Shubham Sangle on 10 Jul 2019
⋮
This is link of answer to similar question https://stackoverflow.com/questions/2468412/finding-a-prime-number-after-a-given-number
Answer mentioned in above link mentions:
Some other methods have been suggested and I think that they are good, but it really depends on how much you want to have to store or compute on the spot. For instance if you are looking for the next prime after a very large number, then using the Sieve of Eratosthenes might not be so great because of the number of bits you would need to store.
Alternatively, you could check all odd integers between (and including) 3 and sqrt(N) on every number odd number N greater than the input number until you find the correct number. Of course you can stop checking when you find it is composite.
If you want a different method, then I would suggest using the Miller-Rabin primality test on all odd numbers above the input number (assuming the input is > 1) until a prime is found. If you follow the list, located at the bottom of the page, of numbers a to check for the given ranges, you can significantly cut down on the number of as you need to check. Of course, you might want to check at least a few of the smaller primes (3,5,7,11 for instance) before checking with Miller-Rabin.

⋮
You can solve it like this, but do you actually understand why this works? Do you check the output of the factor function for non-primes? Did you check what while does for non-scalar inputs?

⋮
@BHARAT JAWLE You did not edit anything I could notice about your answer. Can you answer the questions in my previous comment?

⋮
Direct complete solutions to homework questions are discouraged, as they tend to encourage cheating. Why did you post this?

⋮
i'm posting other type of solutions, if you want to cheat that's you. I'm not forcing anyone to cheat, that's your desicion. Everyone is responsible for their own actions.

⋮
I would question how other this is from other solutions. This is still a while loop with a 1 step increment.
I don't question your intentions, but I do question what the most likely use would be. At least your solution is documented, which is more than can be said from most homework-solutions.

RP on 10 Apr 2019
⋮
I was working on that exercise too and I tried
function next_prime(n)
x=n
while isprime(x) = 0
x = n+1
end
however, Matlab returns "The expression to the left of the equals sign is not a valid target for an assignment."

⋮
Edited: Stephen23 on 10 Apr 2019
You need to read the documentation for every operation that you use, no matter how trivial you think it is. Then you would learn the difference between = (allocation) and == (logical equivalence). In any case, a more MATLAB-ish solution is to use ~ :
if ~isprime(x)
You also forgot to specify any output argument: read the documentation to know how to define functions with input/output arguments
https://www.mathworks.com/help/matlab/ref/function.html

⋮
Thank you for the tip! Unfortunately the function is still not doing what it's supposed to do and I see that it doesn't look right, but I don't really know how to fix it.

⋮
Why did you post this answer? What does it teach? You're more than welcome to start answering questions, but why post a solution to a homework question without any explanation?
If you don't respond this answer will be deleted.

⋮
You didn't understand my point. I personally understand what you're doing. But I'm not the intended audience. You posted a solution for a homework question. That means your audience consists of fellow students. They can do two things with your post: learn and cheat.
To be able to learn from your code they must understand it. Your code doesn't contain any comments, so they can only understand it if they already understand what they should do. If they already understand, why would they bother reading this?
So the only thing they can do here is cheat.
If you don't comment your code, how can a student who can't already solve this on their own learn from what you post? (this is not a rhetorical question)
Also, your code is also fairly complex when you compare it to other posts in this thread that do essentially the same.

⋮
Hope the code is fine now. BTW im new to community and got carried away in solvign and answering questions... so i thought the commenting part was not necessary .. Now its clear .Thank You !!!

⋮
You're most welcome to start answering questions, but I would suggest you don't answer any homework questions. You can find guidelines for posting homework on this forum here, I'll leave it to you to extend them to the answering of homework.
If you just want to practice solving puzzles with Matlab, I can recommend Cody. It will not reward good coding skills, but you will have many different problems you can solve.

⋮
Why did you post this answer? What does it teach? You're more than welcome to start answering questions, but why post a solution to a homework question without any explanation?
Your code works, but it is far from optimal. To understand what you can do to improve it, you should read the accepted answer.

⋮
it is just another simple approach for finding the answer.

⋮
I can't tell why this would work, be efficient, or how this would be simple. Can you explain it? Where is primes coming from? Why are you using an array?

⋮
Edited: John D'Errico on 28 Jan 2023 at 19:01
Ran in:
Does this work? Well, yes, but in a terribly inefficient way. (I'm sorry, but that is true.)
First, for a given value of n, this computes ALL prime numbers up to 2*n. If n is at all large, for example, 1e9.
numel(primes(2e9))
ans = 98222287
So in that case, it generates just under 100 million primes, requiring a little under 1 gigabyte of RAM to store them all.
Then it tests EVERY one of those primes, starting at the first prime (which is 2), and compares that number to n. Is it greater than n? If not, then it looks at the next prime in the list of all primes.
The code relies on something that not all people know (ok, Bertrand and Chebyshev knew it)
https://en.wikipedia.org/wiki/Bertrand%27s_postulate
i.e., that there always exists at least one prime in the interval [n,2*n]. When n is small, this is not so problematic. However, I think you would not want to find the next prime larger than say 1e15 with the code by @Aziz ur Rehman.
nextprime(sym(1e15))
ans =
1000000000000037
The code in this answer is massive overkill. The mathematical equivalent to using a Mack truck to carry a pea to Boston. Rather than just finding the next prime, it first generates potentially millions, or even billions of primes, and then looks to see which one is greater than n. And it does that search very ineffiiciently.
Could this code have been written more efficiently? If a while loop is an absolute imperative, AND the value of n is not too large, AND you cannot use a tool like find, then a while loop does work. But as I said, one can use a Mack truck to carry a pea to Boston. But that does not mean I want to do so as this code was written. For example, had the author used a simple bisection search in that vector of all primes, I would have given the code some grudging respect. And you could write that using a while loop.