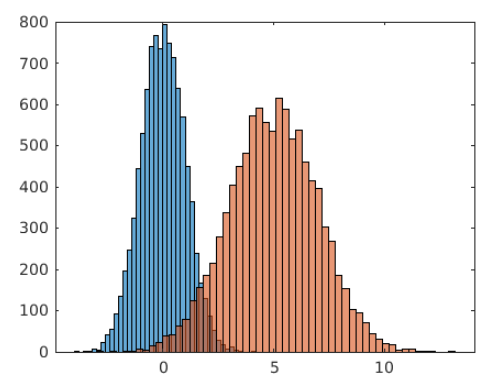 ⋮
Hi, thank you for your answer. Maybe I misunderstood what I meant then.
For the tests that you have shown, they seem to be a better anaylsis tool for my data.
However, you've commented that the tests reject the hypothesis, when the return value is 0 indicating it does not reject the hypothesis?
Sorry I'm a bit confused then, they seem to be a good fit of normal distribution and hence they should reject the null hypothesis as there is clear evidence that the two data set are related, however it returns a value of 0 indicating that it fails to reject.

⋮
Hmmm, thank you for the correction.
Your clarification has contradicted my understanding of the null hypothesis, so I hope you can help me clear it up.
The definition of the null hypothesis: A null hypothesis is a type of hypothesis used in statistics that proposes that no statistical significance exists in a set of given observations.
Therefore, I would believe that between a normally distributed data and a crude looking one like the examples you gave. The tests would come back true, because there is relationship between the two. i.e it rejects the null hypothesis
Failing to reject would mean otherwise.
Where have I gone wrong?

⋮
That definition from Investopedia isn't precise enough. Even wiki's definition isn't precise enough: the null hypothesis is a general statement or default position that there is nothing significantly different happening.
To be more precise, the null hypothesis is typically a test statement that there is no difference in what you're testing at some arbitrary significance level.
The key differences between this definition and other others are
These very common misconceptions are why 100s of scientists, statisticians, and researchers have supported a movement to stop significance testing.
https://www.nature.com/articles/d41586-019-00857-9
Critically, the null hpothesis is whatever the test deems it to be. Look at the matlab documentation for the kstest: