ADSW121365 on 30 Jul 2020
⋮
Commented: ADSW121365 on 30 Jul 2020
I'm trying to use some code I've written on the universities Linux server but I'm encountering an error in running the code there. The code in question runs without error on a standard windows installation. The server is running Ubuntu 16.04 LTS with MATLAB R2020a (which is a supported server version). MATLAB is run via an XMing/putty combination to use the normal GUI to run code.
The code in question works on modelling a number of seperate PDE models via the PDE toolbox. The first segement of code looks something like:
N = 3;
model = createpde(N);
run(['[FILEPATH]/Two_Layer_System_2v.m'])
nodes = msh.POS';
elements = msh.TETS; groupsID = elements(:,5);
elements = elements(:,1:4); elements =elements'; groupsID = groupsID';
geometryFromMesh(model,nodes,elements,groupsID); %Plotting model for geometry & Figures
which runs without error. The second section is then along the lines of (noting no toolbox based calculations or further PDE setup is done at this point):
N_p = 1; %1 Equation solving for P
P = createpde(N_p);
run(['[FILEPATH]/Resized_Nine_',num2str(200),'cut.m'])
nodes_p = msh.POS';
elements_p = msh.TETS; elements_p = elements_p(:,1:4); elements_p =elements_p';
geometryFromMesh(P,nodes_p,elements_p); %CRASHES HERE ON LINUX
The code then crashes on the second geometryFromMesh call with:

There's a slightly different error code (but not message) if I step through the code vs just hitting run, but it always crashes on this second geometryFromMesh call.
I'm hoping this has an easy fix, but I honestly have no idea why the code is crashing as it is, I would expect it to crash on the first call if it were an issue with the function, but stepping through on my windows PC gives identical results until the server version crashes so I'm fairly certain my own code is also fine.

⋮
The two slightly different error codes with a 'backtrace' are here if these help anyone understand the problem: 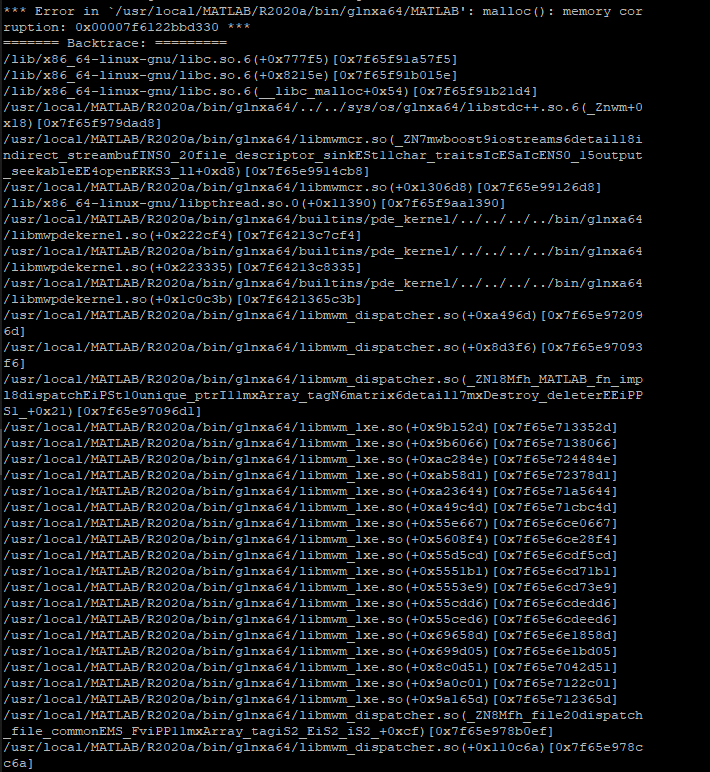 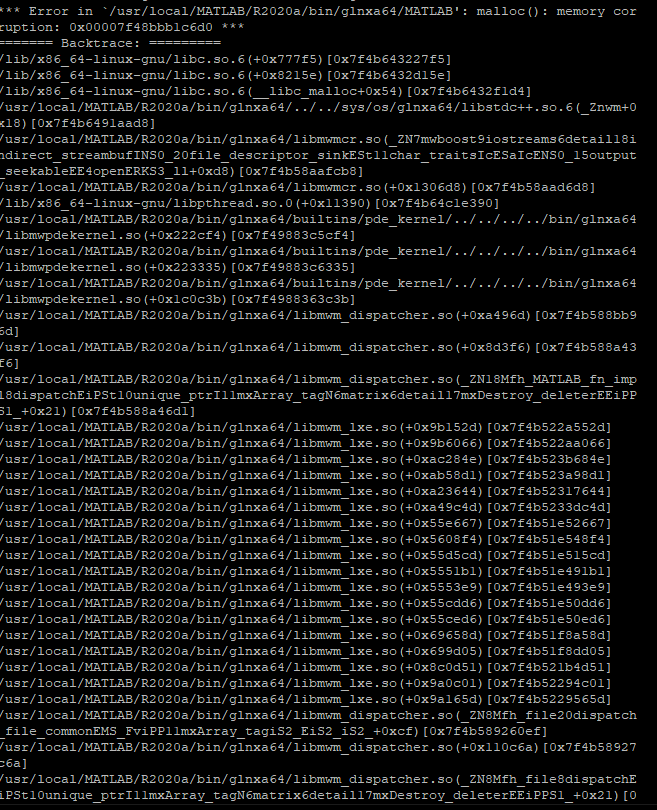