Why do my FFTs look wildly different?

Jassiel Deliz on 31 Jul 2020 at 20:12
⋮
Commented: dpb on 2 Aug 2020 at 16:51
Hi all,
I am working on a project using vibration analysis and soap dispensers. On one of the soap dispensers I get a clean looking FFT, while on the other one it isn't as clean. Why might this be? I've attached all relevant files. For a sensor I am using STMicroelectronic's Sensortile.Box with the LSM6DSOX vibrometer/accelerometer. Soap dispenser 1 has the ideal FFT while soap dispenser 2 has the not-as-ideal FFT.

⋮
The answer is not in the data but in the experimental units somewhere...but we, knowing absolutely nothing about anything regarding the dispensers themselves nor what is measured and how nor what the excitation is can definitively say absolutely nothing about what those differences might be.
But, it's clear just looking at the time traces there's much more vibration/flexibility(*) in the one than in the other -- why is anybody's guess but need to dig into the details of the entire experiment to try to uncover what is happening and why.
All these data can tell you is the two time traces are markedly different in response -- whether it's the input, the DUT, the instrumentation/data collection, phase of the moon, ... is not able to be discerned from just the response.
(*) And that, of course, is just reflective of the traces -- whether that's real or related to the measurement of that unit or a combination of both or yet some other source of signal contamination is impossible to say just from the trace alone.

⋮
IOW, the short answer is "The FFTs look wildly different because the input time traces are wildly different."
The problem is, those don't and can't tell you why -- that's the challenge of experimentation.

dpb on 1 Aug 2020 at 0:06
⋮
Above just based on the figures; reading the m file reveals a major problem -- you only processed the first N = 1024 points of the traces; the impulses aren't in the part of the signal you processed -- what you analyzed looks like 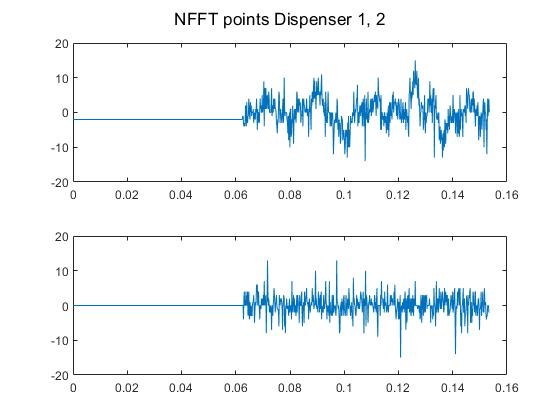 Again, however, even quiescent the two don't appear the same -- there looks to be a more-or-less cyclic disturbance on the upper (#1) as compared to the lower (#2). It's those frequencies your PSD uncovered because that's all the signal you analyzed by using nfft =1024.
If you look at the entire transient (which aren't all that similar in length, either, why? Are they actually sampled at the same rate or did just not run the second as long?)
Then, the results look much different, but the two still aren't the same at all-- 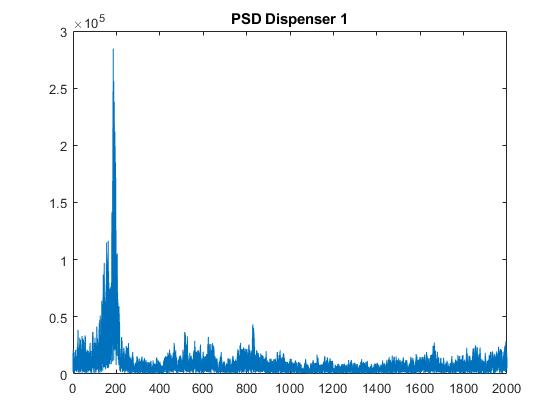 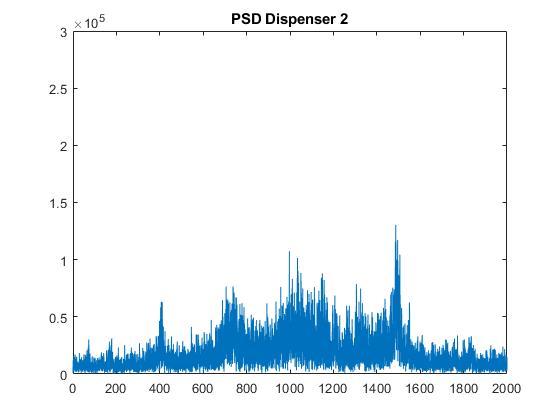 There is, again, more structure in #1 than #2 as the time series would suggest; there's a pretty nice resonance around 200 Hz in #1 but a much broader spectrum of energies on #2. There's a little energy at the roughly 200 Hz location but more at what looks to be 2X that; then a whole broadband noise followed by another peak at 1550 Hz or thereabouts.
I would wonder if the accelerometer were mounted solidly on the latter, but something definitely isn't the same between the two.
The upshot is that you need to
On the latter, I'd suggest probably should isolate those regions from the rest of the signal and process them separately and see how similar/dissimliar they are between each other as well.
Again, without knowing anything further, it's all just guesswork, but not analyzing the whole signal means you weren't looking at all at what you thought you were.
The rest is still something you'll have to try to unravel.

⋮
Another Q? would be what is it that you're trying to accomplish as end object here? Seems peculiar to do FFT on a soap dispenser...what is it actually measuring and why does it matter?