How to decompose a series into trend, seasonal, and residual components assuming an additive model?

carolina on 17 Mar 2021
⋮
Edited: Kaiguang Zhao on 2 Apr 2022
Accepted Answer: Kaiguang Zhao
Hi, I am trying to decomposition a time serie. I have a time serie with predictive temperature and real temperature. So, I need to decomposition time series for better understand problems during time series analysis and forecasting.
Where the components are added together as follow:
Time series = Level + Trend + Seasonality + Noise
Noise=Time series- seasonality -trend
I have tried to do this but, I only have understood how to estimate a long-term trend and seasonality. I need to show a similar result or if there is a tool to decomposition time serie in components.
https://www.mathworks.com/help/econ/moving-average-trend-estimation.html 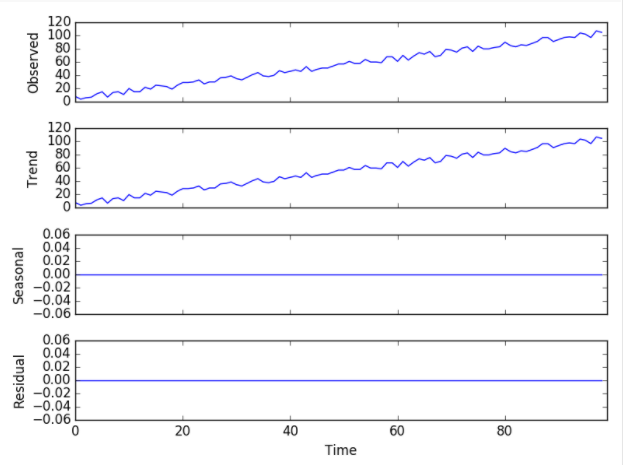 I have not been able how to estimate noise or residual component. Thanks in advance for your help.

⋮
I also need an answer on this!

Kaiguang Zhao on 2 Apr 2022
⋮
Edited: Kaiguang Zhao on 2 Apr 2022
Copied here is the same answer to your same question posted in another thread:
Numerous time series decomposition algorithms are possible and the results are sensitive to the algorithim choices. (An excerpt from here: The notional of seasonal variation is always intrinsically ambiguous: whether the temporal variation should be considered Seasonal, Trend, or Remainder is, to a degree, a matter of opinion and determined by choice of model and model parameters. This is true in STL as well as any seasonal variational approach).
In case that somebody is looking for an alternative, one choice is a Bayesian method called BEAST (Bayesian Estimator of Abrupt Change, Seasonality, and Trend), available from this FileExchange entry or https://github.com/zhaokg/Rbeast. It can be instally installed by running eval(webread('http://b.link/beast',weboptions('cert',''))). BEAST actually does the time series decomposition and changepoint detection at the same time. Below is a quick illustration using a monthly Google search Trend time series on the keyword 'beach in the US:
eval(webread('http://b.link/beast',weboptions('cert',''))) % Quick installation of BEAST to a tmp path
load('googletrend.mat') % Monthly Google search trend data of 'beach' since Jan 2004
o = beast( beach ) % Apply BEAST to the 'beach time series: beach is a data vector only; the time
% info can be supplied using the start and deltat
% keywords, as in the next commented line
%o = beast( beach,'start',[2004,1],'deltat',1/12 )
printbeast(o) % print the changepoints detected
plotbeast(o) % plot the results: o.season.Y and o.trend.Y are the seasonal and trend compoents
Below is the plotted result. The decomposed seasonal signal and trend are in the 'seasona' and 'trend' subplots, respectively. In the fitted seasonality and trend, seasonal changepoints (scp) and trend changepoints (tcp) are detected seperately. As a Bayesian method, it not just tells when there are some changepoints but also quanitifies the probablity of changepoint occurrence over time (the Pr(scp) and Pr(tcp) subplots where the peaks indicate the times when the changepoints most likely occur).
Some possible interpretations of the results: There was a sudden jump (or structural break) in the summer of 2011 (The summer of 2011 was the hottest one on record for the US: the time series 'beach' again refers to the US online search popularity for 'beach'). There was also an abrupt rise at the start of 2016, again possibly attribute to the abormal high temperature (January 2016 Was the Most Abnormally Warm Month Ever Recorded: https://weather.com/news/climate/news/record-warmest-january-global-2016). There was a sharp drop in the search popularity around April 2020 (attributed apparently to the covid outbreak). 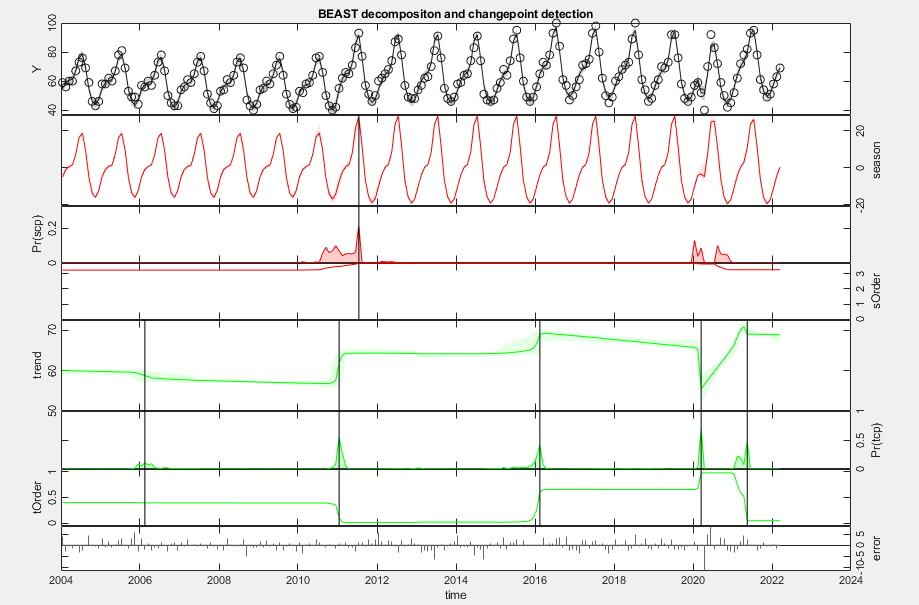 BEAST can also handle trend-only time series. Below is also an example to explain the meaining of tOrder and sOrder (e.g., the y labels in the figure above)..
y = [zeros(1,100) 1:100 99:-1:50 50*ones(1,250)] + 10*rand(1,500); % a trend-only time series without perodic/seasonal variation
o = beast(y, 'season','none') % season='none': y has no periodic/season component
plotbeast(o)
printbeast(o)
The trend is fitted using a piecewise polynomial model. Again, as a Bayesian method, BEAST assumes the order of the polynomial as uknowns. The orders of the polynomial needed to adequately fit the trend are estimated over time, as depicted iin the tOrder subplot. The 1st and 4th segments are flat lines, so their estimated poly orders are close to zeros. 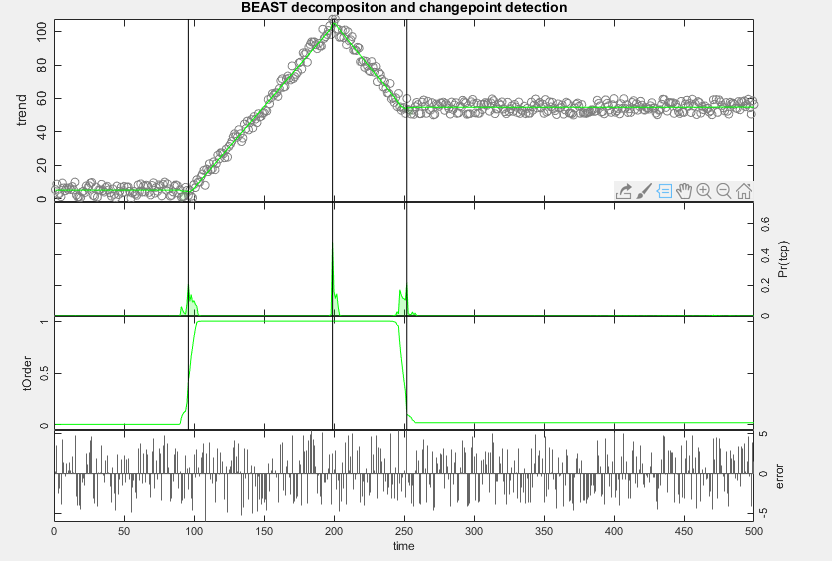