Generation of a basis vector following a constraint.

Vira Roy on 30 Apr 2021
⋮
Commented: Vira Roy on 2 May 2021
Accepted Answer: David Goodmanson
Problem: I Want to generate a set of basis vectors which follows the constraint 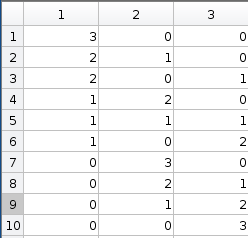 I want to write the code which is more general so that, I do not have to rewrite the code everytime if I want a different value for N. Any help regarding the same would be helpful.
Thank You.

David Goodmanson on 1 May 2021
⋮
Edited: David Goodmanson on 1 May 2021
Hi Vira,
The for loops that you did are a good approach, but like you say this will become impractical as the length of the vector gets larger. General solution, for the second example:
n = 3; % length of the vector
t = 3; % sum of values
a = nchoosek(1:t+n-1,n-1)
s = size(a,1)
b = [zeros(s,1) a (t+n)*ones(s,1)]
v = diff(b,[],2)-1
Comment: In the second example, you are looking for a vector with 3 values, each value >=0, and the values sum to 3. Suppose the problem is altered temporarily by adding 1 to each value. So now each value is >=1, and the values sum to 6.
Consider a vector of 7 elements, values 0 through 6. Divide the vector into three sections, using two nonidentical movable 'marker' elements that do not include the end points. Here the moveable markers are two elements out of the set of values 1 through 5, and the function nchoosek(1:5,2) give a list of all possible choices. An example is
0 1 2 3 4 5 6
| | | |
m m
Two stationary lines have been added at the end points. Now as the m's move around, the distances between the marker lines are the 3 values you need. These distances have minimum value 1 and add to 6. Subtracting 1 from all three distances gets back to the original problem.

⋮
Thank for the solution David. Not only is it general, it is extremely fast as well for larger values.