Need help to track a couple of points

Nuno Marques on 31 Jul 2021
⋮
Commented: sparsh garg on 8 Sep 2021 at 12:13
Hello, its my first time posting here so I apologize if im not doing something properly.
I'm currently doing a project where i need to know a drone's position and attittude in reference to his landing pad using only a camara. The landing pad has 11 led's of different colors. My first step was creating a mask so i could extract the leds. The image below shows the result of the masked points. 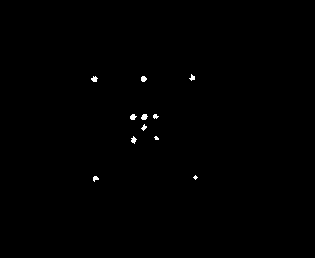 The mask is doing a pretty good job of getting rid of noise, but sometimes it doe not identify all 11 points. Now, i know i should use the matching features surf to know where the points went in the next frame, so i can then use the relativeCameraPose function to know the relative pose and attitude in reference to the landing pad. However, i cant get good matches. The image bellow are the matches using surf of 2 consecutive frames, where the red points are the detected leds on one frame and the blue ones on the frame after that. 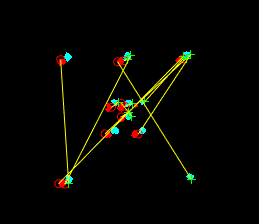 What am i doing wrong? Is there a better way to get the relative pose?

⋮
There are special tracking capabilities in the Computer Vision Toolbox. Are you taking advantage of those?

⋮
I am not. I'll give it a shot and update you on the results. Thank you very much!

⋮
Hey, I've used the Registration Estimator ToolBox to help me with the point maching. However it still can't match properly. Im trying to do a blob analizes to get the centroid of each blob to then match them myself. How can i do this process of manually matching the points?

⋮
I suggest you just buy a professional tracking program. Tracking is very very complicated, what with objects leaving and entering the frame, obscuring each other, etc. What if two overlap and then separate? Then you have to look for unaccounted for objects that were nearby and try to extrapolate their position based on their velocity and then pick the most likely one. As you can see it's very complicated. So much so that I've not attempted it myself. It could take literally months to develop. It's much simpler if you can assume that no objects ever overlap or leave the field of view, they move slowly, and that no others enter the field of view. Then what I'd to is find the drone's centroids and start with the one that is farthest away from any other. Use pdist2() for that. That drone is less likely to be confused with any other in the subsequent frame. So match that one. Then go to the next farthest one and find it's match, and so on until all drones are accounted for. When there are several within the same distance, you're going to have to use the latest velocity vector to try to guess which one is the one you're after.

⋮
Ahah this is for a class. Im currently taking my Master's degree, so it isnt worth to pay for a professional program. But thanks, ill try that!

⋮
Did you see these:

⋮
I would suggest you look at the most basic tracker Kalman filter that uses a constant velocity model.Also look at SORT it handles all the problems that image analyst was talking about.
There are some good correlational filter based trackers on matlab
since you have a set of landing pad points which you need to track,I think the kalman filter with velocity model should work.
Matlab has a tracking pedestrains from a moving car example that uses the approach I mentioned