Vehicle Dynamics for use with MATLAB & Simulink 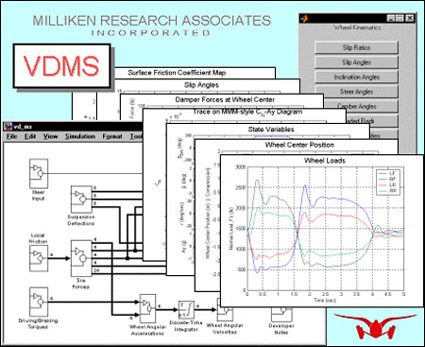 Vehicle Dynamics for use with MATLAB/Simulink (VDMS) is a lumped-parameter, 15 degrees-of-freedom vehicle simulation program that reads input files containing chassis, suspension kinematics and compliances, tire, driveline, and aerodynamic inputs. MRA's Nondimensional Tire Model is included as an S-function, and the code has been written to allow for the substitution of other tire models. More than 200 dynamic engineering outputs are recorded per major timestep, and users can create plots or use one of more than 40 preprogrammed plots.

VDMS is suitable for passenger automobile OEMs and suppliers, racecar manufacturers, racing teams, and related organizations. Specifically, VDMS has been used by vehicle dynamicists and other engineers and control system developers. VDMS is programmed in Simulink® with core equations and transforms compiled as S-functions. Inputs and outputs to the S-Functions, as well as the remainder of the Simulink code, are well-documented and open to the user. The MATLAB® command window controls program operation, initialization, and postprocessing.