Constants not recognized in integral

Florian Spicher on 17 Oct 2021
⋮
Edited: John D'Errico on 17 Oct 2021
I'm a begginer with Matlab, so I bet this is obvious but I don't understand the error I have. Can you please help me correcting it?
It says that my variable a (and I guess b and c as well) is unknown even though I defined it at the very beggining of the script.
Also, side question: I had an error telling me I couldn't square "my matrix" because of its dimensions but when I put points before my ^2 the problem vanish. Any (brief) explanation please?
double a; double b; double c;
integral(@(x) f(x),0,1)
function p=p(x)
p=a*x.^2+b*x+c;
end
function f=f(x)
f=(exp(x)-p(x)).^2;
end

John D'Errico on 17 Oct 2021
⋮
Edited: John D'Errico on 17 Oct 2021
Ran in:
You are still thinking that you are using some other language, where you need to declare variables as doubles.
This line does not do what you think:
double a; double b; double c;
In fact, it does not even create variables with that name. What did it do?
whos
Name Size Bytes Class Attributes ans 1x1 8 double
So when I tried whos there after having used the line you had written, it shows that NOTHING useful was done. No variables were created. What did those calls do?
double a
ans = 97
Here, we see that call takes the character 'a', converts it to its ascii equivalent (97), then puts the result in the variable ans, effectively dumping it in the bit bucket.
In the case where you want to define those variables as unknown constants, which is what it looks like you want to do? I say that because you never did assign any value to those unknown constants. If so, then you might have done this:
syms a b c % this does create new SYMBOLIC variables with those names
whos
Name Size Bytes Class Attributes a 1x1 8 sym ans 1x1 8 double b 1x1 8 sym c 1x1 8 sym
So you can see that now, a,b, and c now exist, and are symbolic variables. They are now effectively unknown constants. syms is the one case where you will want to declare the variables you use as symbolic. Everything else is a double by default.
syms x
p = a*x.^2+b*x+c
p = 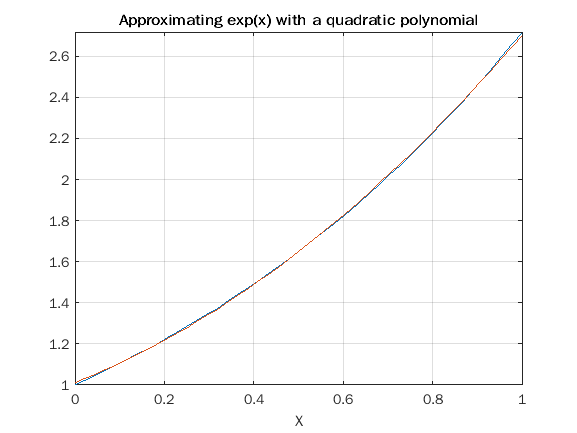 The approximation is seen to be quite good, as the two curves are almost impossible to distinguish from each other.
figure
fplot(@(x) exp(x) - p(x,abcopt(1),abcopt(2),abcopt(3)),[0,1])
xlabel X
ylabel error
grid on
title 'Error in approx of exp(x) with a quadratic polynomial' 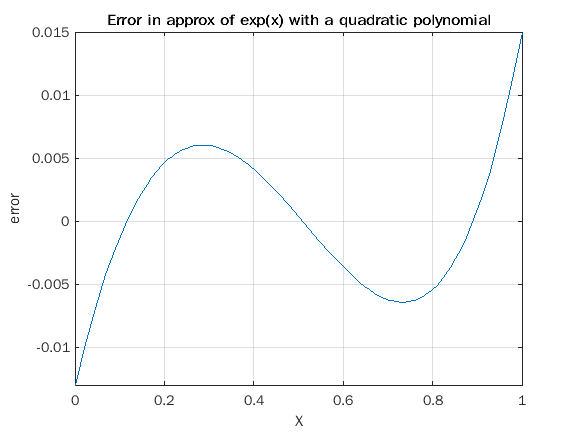