Biologists or biochemical engineers who are studying natural or synthetic proteins, producing reagents of medical or commercial interest, and constructing synthetic biological circuits often need cell populations that synthesize a specific protein via gene expression. In many cases, it’s important to have uniform gene expression across individual cells because many proteins fail to function as intended when their concentrations are too low or too high.

Achieving uniform expression levels can be difficult, however, particularly when scientists apply a commonly used process called transient plasmid transfection, which introduces plasmids—small DNA molecules that carry only a few genes—into cells. The process produces a wide distribution of the number of plasmids in each cell, and consequently, large variances in protein expression, which greatly complicates any research conducted using the resulting cell population.

My colleagues and I have developed synthetic biological circuits called Equalizers that mitigate variances in protein expression stemming from plasmid count differences across cells. To accelerate the development of these novel circuits, we used MATLAB® and SimBiology® to model and simulate them before verifying the simulation results experimentally (Figure 1). These simulations reduced the number of lab experiments needed, making it possible for us to focus our lab time on circuits that showed the most promising results in simulation. 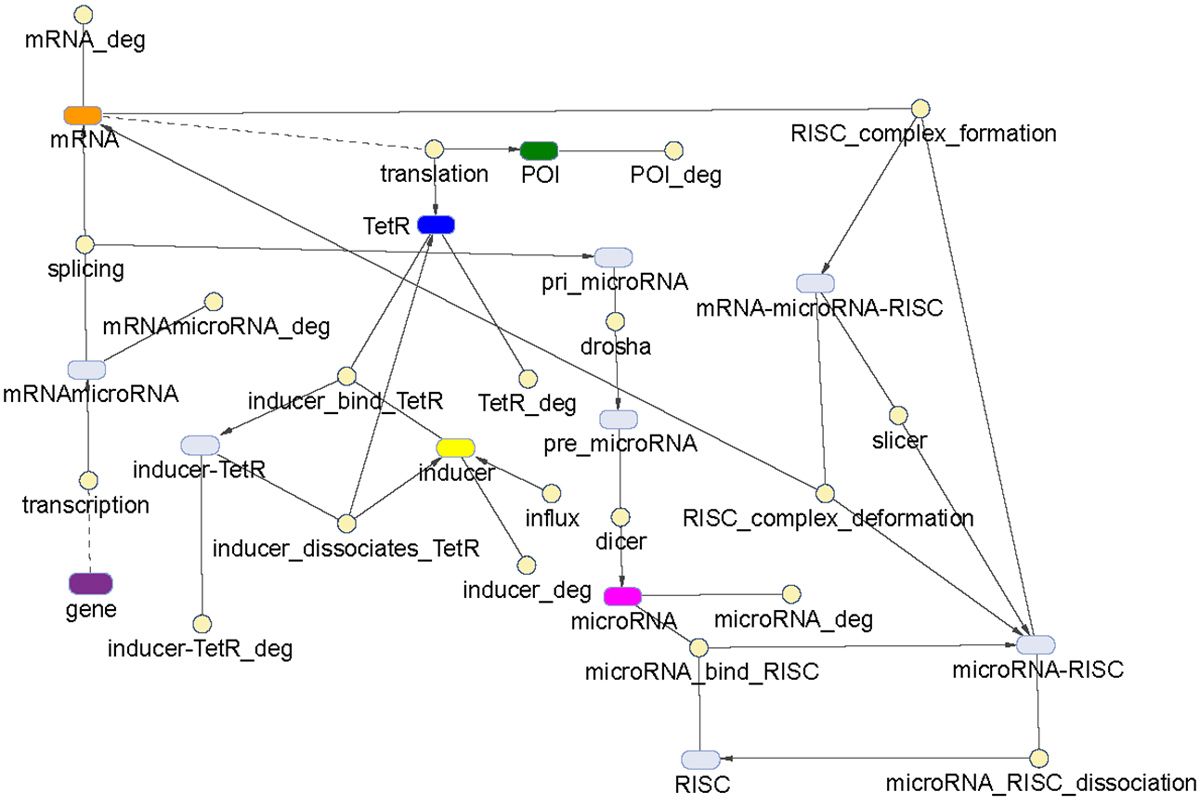 MATLAB and SimBiology enabled us to create mechanistic models of individual circuits, run simulations to evaluate circuit output across populations of cells, conduct parameter sweeps to identify key parameter values, and optimize the performance of the circuits. The resulting Equalizer circuits can maintain a roughly constant rate of protein expression even as the number of plasmids in each cell (the plasmid copy number) ranges from 1 to 1,000.

Before we developed Equalizers, we explored two approaches that had been proposed in earlier research: negative feedback (NF) and incoherent feedforward (IFF) loops. Researchers had used NF loops to tune protein expression linearly. When we created a SimBiology model of the NF loop, the initial simulation results appeared to confirm that NF could be used to maintain consistent levels of protein expression across a range of plasmid copy number values. When we ran experiments, however, we found that the circuit performed significantly worse than the simulations had predicted.

We suspected that the cause was “leaky” expression from the inducible promoter, a phenomenon in which incomplete repression occurs at high repressor protein concentrations. After we updated our SimBiology model to account for this leakage, the simulation results aligned with the experimental results we had seen. Still, NF loops alone would not be sufficient to maintain consistent protein expression among individual cells, because they performed poorly as the plasmid copy number increased from 10 to 100 or more.

IFF and NF circuits operate differently to repress protein production. In IFF circuits, a common input drives the expression of an inhibitor that represses only production of the output protein, not its own production (Figure 2a). In NF circuits, an input (a plasmid, for example) drives the expression of an inhibitor that represses both its own production and that of the output protein (Figure 2b). Researchers had shown previously that IFF circuits can help maintain consistent circuit output for plasmid copy numbers in the range that NF circuits had trouble with (roughly 10 to 100) but performed less well outside that range. 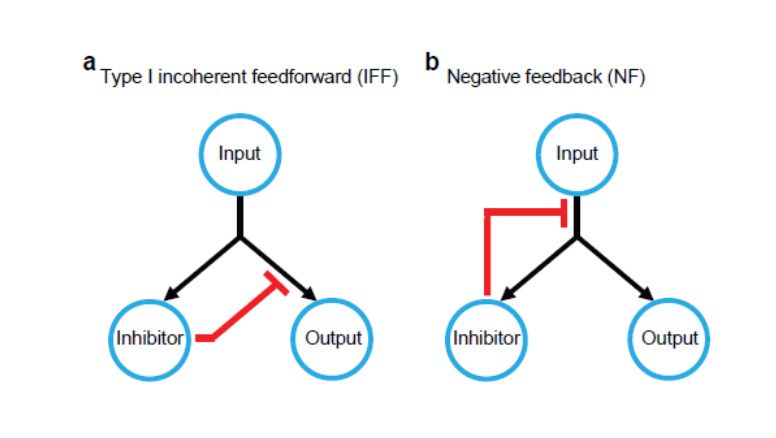 Based on our initial modeling and analysis, we hypothesized that a circuit that combined NF and IFF loops might perform better than either NF or IFF circuits alone, and we set out to confirm this hypothesis via simulation. We created a model of the new combined circuit, which we later named Equalizer, in SimBiology and ran simulations to evaluate its ability to compensate for variations in plasmid copy number. Early results were promising and suggested that a specific parameter of the IFF circuit in the model—the binding affinity of the microRNA to its target—heavily influenced the circuit’s compensation performance. To study this relationship further, we wrote a simple MATLAB script to programmatically sweep through a series of values for the model’s optimal microRNA binding affinity parameter.

Our simulations showed that Equalizer circuits outperformed standalone NF and IFF circuits with appropriate binding affinity of the microRNA to its target identified through the parameter sweep, both in terms of circuit output and cell-to-cell variability; subsequent experiments confirmed these results (Figure 3). 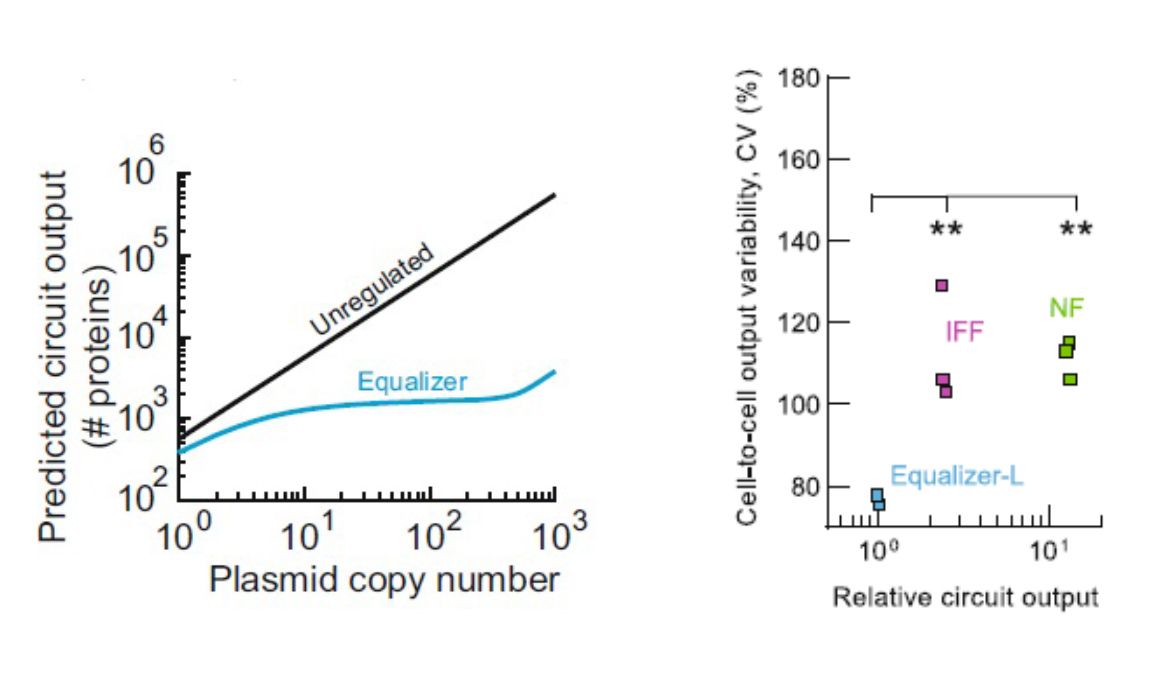 Figure 3. (Left) Plots of Equalizer performance showing the ability to hold circuit output relatively constant across a wide range of plasmid copy number values. (Right) A plot showing the experimentally verified capacity of an Equalizer to have lower cell-to-cell variability compared to NF and IFF circuits. 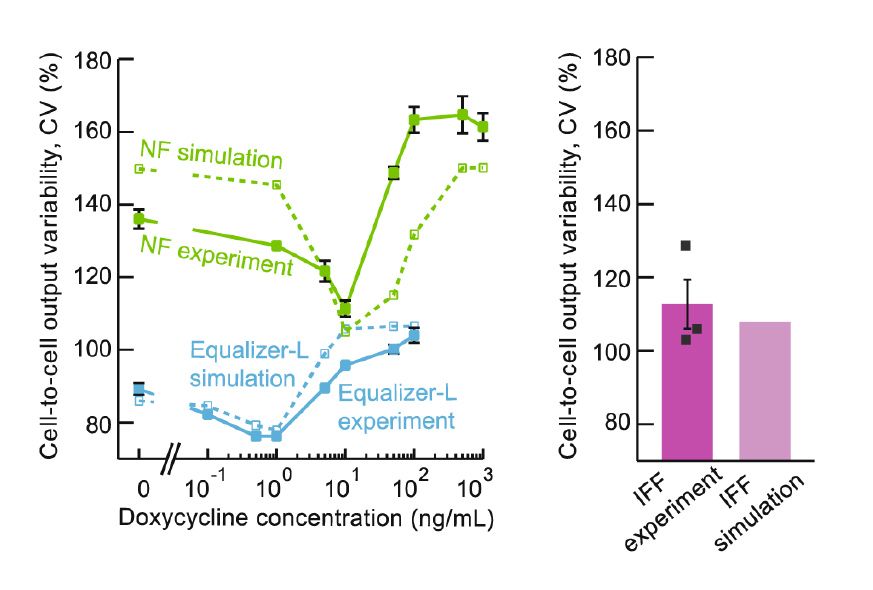 Later, we compared the Equalizer circuit’s performance to the performance of cytomegalovirus (CMV) and phosphoglycerate kinase (PGK), two commonly used promoters (sequences of DNA that define gene transcription). As expected, we found that the Equalizer circuit was able to better maintain consistent circuit output over a much broader range of plasmid dose than either CMV or PGK (Figure 5). 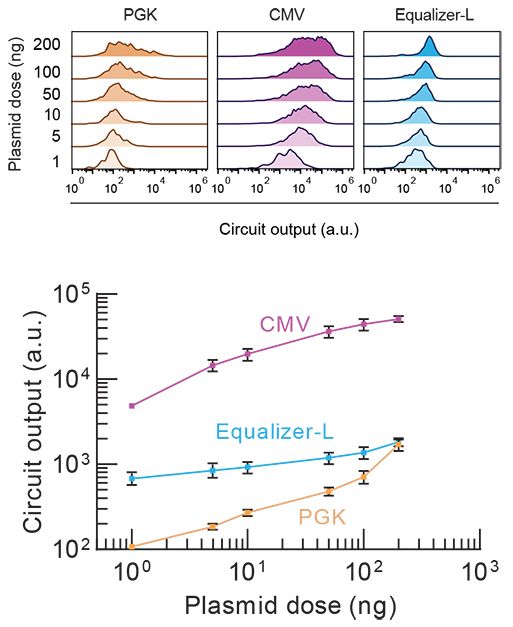 Figure 5. Plots showing the performance of an Equalizer compared to unregulated PGK and CMV promoters.

The initial development of Equalizer circuits opens several promising avenues for further research. These include enhancing the circuits to adapt to changes in cellular resources, increase expression levels, or minimize modifications to the sequence of the expressed protein. Because lab experiments are more costly and time-consuming than simulations, future development will benefit from first modeling enhancements in SimBiology, then running simulations and parameter sweeps to narrow the scope of experiments.

The author gratefully acknowledges the contributions of his co-authors Jihwan Lee, Michelle A. Land, Shujuan Lai, Oleg A. Igoshin, and François St-Pierre.

Jin Yang is a PhD student in biological engineering at MIT. His research is focused on the development of new bottom-up synthetic biology strategies for understanding how 3D genome organization regulates genome function. Jin earned a BS in bioengineering from Rice University.