Parallel computing techniques can help reduce the time it takes to reach a solution. To derive the full benefits of parallelization, it is important to choose an approach that is appropriate for the optimization problem.

This article describes two ways to use the inherent parallelism in optimization problems to reduce the time to solution. The first example solves a mathematical problem using the parallel computing option in Optimization Toolbox™, and requires no code modification. The second, a practical engineering optimization problem, requires a single-line change in code. Both examples use Parallel Computing Toolbox™ and MATLAB Parallel Server™ to automate and manage the parallel computing tasks. 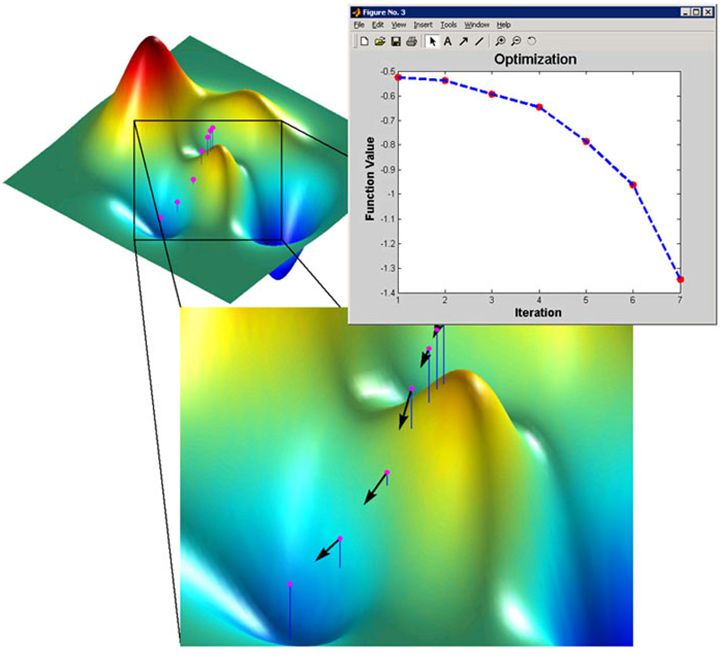 Figure 1. Using a gradient-based optimization solver to search for a minimum value. Click on image to see enlarged view.

Gradient estimation is often the most time-consuming computation during optimization. In a single iteration, the optimization solver estimates the local gradient of the function and uses that information to determine the direction of the search and the magnitude of the step to the next point in the search. This process is repeated until the solver finds a minimum value or reaches a predefined time or iteration limit.

Figure 2 shows how you can perform computations in parallel to accelerate gradient estimation. The N function evaluation used to estimate the gradient when performed on a single MATLAB worker would be executed serially. 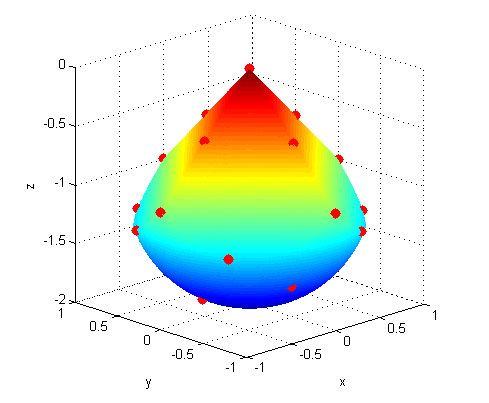 The optimization goal is to minimize the total potential energy of the electrons subject to the constraint that the electrons remain within the conducting body. The objective function, potential energy, is the sum of the inverses of the distances between each electron pair (\(i,j = 1, 2, 3,... N\)):
\[\text{energy} = \sum_{i<j}\frac{1}{|x_i - x_j|}\]

The constraints that define the boundary of the conducting body are

As written, the first inequality is a nonsmooth nonlinear constraint because of the absolute values on \(x\) and \(y\). Absolute values can be linearized to simplify the optimization problem. This constraint can be written in linear form as a set of four constraints for each electron, \(i\).

This problem can be solved with the nonlinear constrained solver fmincon in Optimization Toolbox. Figure 4 shows the problem formulation in MATLAB. Note that in defining the objective function, sumInvDist, the statement pause(t) was added. This changes the time taken to execute sumInvDist, letting us determine how the execution time changes the solution time. 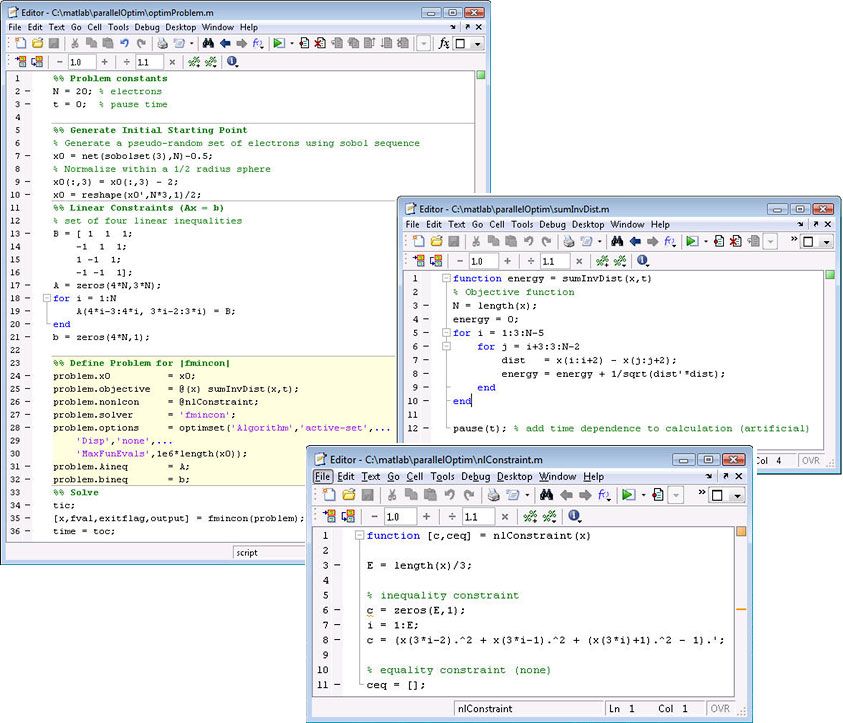 We execute the optimization problem on a single MATLAB worker. For convenience, we define speed-up as the ratio of the time it takes to solve the problem on 1 worker relative to the time it takes to solve the same problem on N workers. Thus, for any problem running on a single worker, the speed-up is defined as 1. When the same problem is run on more than one worker, a speed-up greater than one denotes a reduction in solution time and a speed-up less than one denotes an increase.

To use the parallel computing capability in Optimization Toolbox, we change the ‘UseParallel’ option from the default, ‘Never,’ to ‘Always’, enable the desired number of compute nodes with the matlabpool command, and run the optimization solver as before (Figure 5).

This example runs on two workers and is 20% slower than the single-worker case. The evaluation time of N objective and constraint functions is on the order of 0.5 milliseconds. A single evaluation of the objective function and the constraint function takes about 0.5 milliseconds. Because the evaluations take so little time, the overheads associated with farming out data and computations outweigh any gains that are realized by running the code in parallel. As a result, distributing computations to run in parallel is slower than running the problem serially.

This example shows that for optimization problems to benefit from running the computations in parallel, the cost associated with the function evaluations with gradient estimation must be greater than the overhead costs associated with data and code transfer.

To further understand the trade-offs associated with the objective function execution time, number of MATLAB workers, and number of variables (electrons), we ran this problem with a pause time (t) ranging from 0 to 0.4 seconds, different workers from 1 to 32, and number of electrons ranging from 8 to 20. Figures 6a and 6b show the results plotted for t = 0 and 0.1 seconds, respectively.

Figure 6a shows how the number of electrons changes the speed-up. For 8 and 10 electrons, the overhead cost of more workers reduced the speed-up. For 16 electrons, the overhead cost fell below the function evaluation cost, and we saw a positive effect on the speed-up for most workers. The average time to evaluate one objective function was on the order of 1 millisecond on a single worker. The maximum speed-up occurred at around 8 workers. Increasing the number of workers increased the communication overhead and eventually eliminated the benefit of using parallel computing.

Figure 6b shows how the results change when the objective function evaluation time significantly exceeds the overhead costs. A rapid increase in speed-up is again observed around 8 workers. Notice that the maximum reductions in the curve for the 8-electron case and the 16-electron case are 8 workers and 16 workers, respectively. This increase is a result of balancing the number of parallel computations that can be performed with the same number of workers. For the 8-electron case, 8 workers resulted in the greatest increase. A similar trend is seen for the 16-electron case.

We will take this approach by distributing computations within the objective function for the problem shown in Figure 7. The goal of this problem is to design a suspension system that minimizes the discomfort the driver would experience when traveling over a bump in the road. At the same time, we must account for uncertainty in the mass of the driver, passengers, and trunk loadings. We can modify the four parameters that define the front and rear suspension system stiffness and damping rate: kf, kr, cf, cr. The masses of the driver, passengers, and trunk loadings are uncertain and have a normal distribution assigned to them.

A Monte-Carlo simulation is performed to capture the different vehicle loadings. The model outputs are angular acceleration about the center of gravity (thetadotdot, IMAGE) and vertical acceleration (zdotdot, IMAGE).

Figure 8. Objective function used to run a Monte-Carlo simulation within the optimization process. Click on image to see enlarged view.

In a Monte-Carlo simulation, each run is independent and therefore can benefit from parallel computation. To convert the problem from serial to parallel, we simply replace the for loop construct with the parfor (parallel for loop) construct (Figure 9). The objective statements inside the parfor loop can then run in parallel, speeding up the objective function evaluation time. 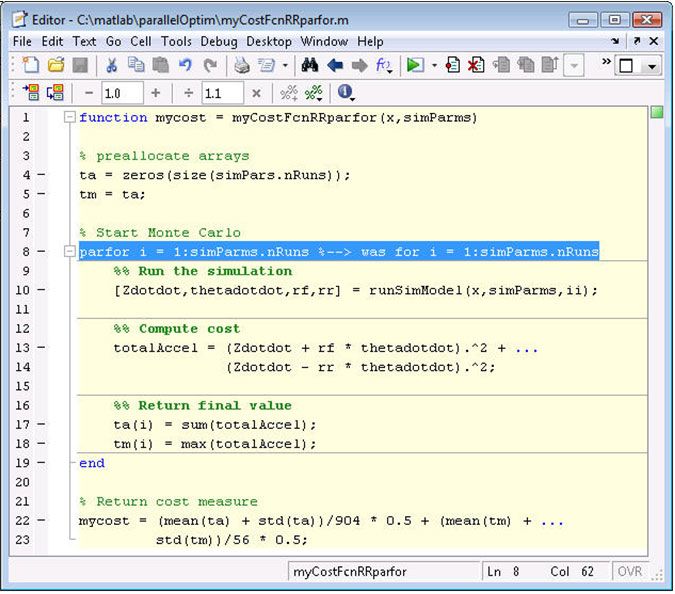 The optimization problem was run for three different values of nRuns, the number of points to evaluate in the Monte-Carlo simulation. The results show that parallelizing the objective function yielded substantial performance gains (Figure 10).

As the results show, it is best to select a parallelization method based upon where computational expense is encountered in the optimization problem. The first example showed that it is possible to see a reduction in performance even after distributing computations if the objective/constraint function execution time does not exceed the communication overhead. For the problem and hardware configuration tested, we would need an execution time of at least one millisecond to see any benefit from parallelizing the problem.