“Convinced by the benefits of rapid prototyping using event-based simulation with SimEvents, we have decided to apply this same approach to validate new operational concepts on next-generation Earth observation spacecraft.” 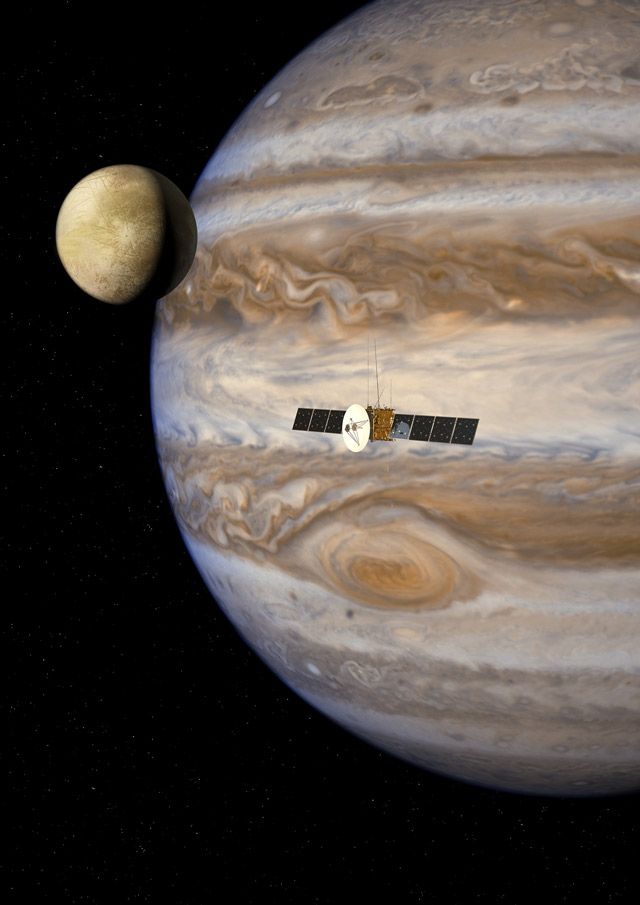 Rendering of JUICE in the Jovian system.

Slated for launch in 2022, the JUpiter ICy moons Explorer (JUICE) mission will carry a payload of 11 scientific instruments on an eight-year journey to Jupiter, the largest planet in the solar system. Once there, the instruments, which include a camera, magnetometer, interferometer, altimeter, and spectrometer, will make detailed observations of Jupiter and three of its moons—Ganymede, Callisto, and Europa. The main goal of the mission is to gain insights into the conditions that support planet formation and the emergence of life.

Streams of data generated by the JUICE instruments will be stored in solid state mass memory (SSMM) before being transmitted to Earth. Data flows from the instruments to storage and downlink can be complex due to the variety of instruments used, the relative priority of the data collected, and limitations imposed by the transmission channels.

Engineers at Airbus Defence and Space use event-driven models created with Simulink® and SimEvents™ to simulate these data flows and assess onboard data latency, data storage capacity, and the effects of downlink error rates.

“Our decision to select MATLAB, Simulink, and SimEvents for the development of our simulation model was directly influenced by the robustness, scalability, and flexibility of these products,” says Alexandre Cortier, R&D engineer at Airbus Defence and Space. “Rapid prototyping of event-based systems with SimEvents enabled us to validate new operational concepts planned for JUICE well before the preliminary design review and to reduce risk in subsequent implementations of the system.”

Each instrument planned for the JUICE mission produces up to four data streams, with data rates that vary over time. Each stream is linked to an SSMM directory containing files that will be transmitted to Earth via X or Ka frequency bands. If a file is corrupted during downlink, the ground station will request a retransmission. Files are deleted only after a successful transmission is confirmed.

System variables, including the number of directories allocated to each instrument and the downlink priority of each directory, add to the complexity of the system. This complexity makes it difficult for operations architects to anticipate how various parameter configurations and interactions between subsystems could affect system performance.

Airbus Defence and Space wanted to create a model that would enable architects to run simulations to validate their operational concepts and tune parameters to fulfill mission requirements on file latencies (the time between onboard acquisition and full reception on the ground) according to their assigned priority. The model needed to be ready before the JUICE preliminary design review. A key requirement was simulation time: The simulator had to be capable of running a 15-day mission in less than 10 minutes to allow architects to run a large number of representative simulations.

These blocks have parameters that operations architects can adjust to explore various configurations and simulation scenarios. Parameters include the number of instruments, the number of streams for each instrument, the number of directories, directory sizes and priorities, and downlink transmission rates and error rates.

The team assembled a reference system model from the individual component blocks that included 10 Equipment blocks, an SSMM Directories Manager block, and two Downlink Band Management blocks, one for Ka-band and one for X-band transmission.

The implementation team developed the simulator using SimEvents DES blocks. They built a graphical interface with MATLAB App Designer to make it easy for operations architects and other users to configure and run simulations and analyze the results.

As a result of their positive experience with event-driven models on the JUICE project, Airbus Defence and Space engineers have developed similar models for an internal project to validate new operational concepts.