Use Model-Based Design with Simulink and Embedded Coder to model, simulate, and generate code from a model predictive controller that maximizes excavator work performance

“With Model-Based Design, our hydraulics engineers can complete the controller design and implementation without involving an embedded engineer. That’s a big advantage, because it saves time and results in a higher-quality controller.” 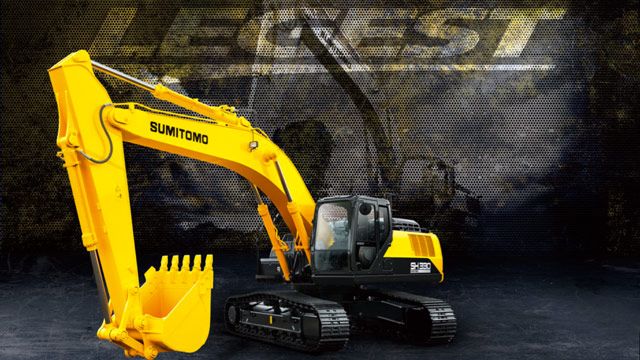 Hydraulic excavators need controls that keep the engine at a constant speed as the excavator picks up and drops off heavy loads. When designing these embedded controllers, engineers must take sudden fluctuations in load into account, as well as ensure that the design meets tightening emissions standards and safety requirements.

“With Model-Based Design, we focused on developing control algorithms, not writing low-level code,” says Eisuke Matsuzaki, engineer at Sumitomo Heavy Industries. “As a result, we were able to deliver a high-quality controller in a limited amount of time while under tremendous time pressure.”

Sumitomo Heavy Industries, like many heavy equipment manufacturers, sources its engines from another supplier. As a result, the engineering team needed a way to determine the characteristics of the engine and its black-box RPM controller. They then needed to design a model predictive controller (MPC) that minimized changes in engine speed during load fluctuations while managing the delays associated with CAN bus communication. The team chose MPC because it accounts for input and output constraints and because they could adapt it to multiple engine types by changing the internal prediction model.

In the past, Sumitomo Heavy Industries followed a traditional development approach in which a control algorithm was designed by a hydraulics engineer, coded by an embedded engineer, implemented on a target processor, and then tested by the hydraulics engineer on a real excavator. Miscommunication between the engineers, coding errors, and limited access to test hardware often slowed development iterations. With stricter emissions standards about to take effect, the Sumitomo team needed to shorten development iterations and deliver a new controller on a tight schedule.

Working in Simulink with Simulink Design Optimization™, they built a transfer function–based plant model by estimating parameters from engine test data. They incorporated input disturbances such as the torque load placed on the hydraulic pump, as well as non-linearities such as power source output limits and dead time.

They then used the estimated plant model as an internal prediction model in an MPC designed with Model Predictive Control Toolbox™. They tuned controller parameters and verified the controller design via simulations in Simulink.

Using Embedded Coder®, the team generated hundreds of lines of C code from the controller model for a 32-bit RISC microcontroller. They updated the generated code to support multiple engine types with a single controller.