How do I disable the new pop-up command history window?

Mark on 7 May 2014
⋮
Commented: Mayela on 10 May 2020
Accepted Answer: Justin
How do I disable the new pop-up command history window in 2014a? I absolutely hate it and never want it to appear again.

⋮
I'm also interested in disabling this feature, but I want to have the option to return to the earlier MATLAB environment option of having an UNDOCKED command history window. Justin's answer to this question involves merely docking the window, which is hard to use on a screen with limited real estate (e.g., my laptop).
Is there a way to undock the command history window, the way one can undock and editor window,without having it disappear as a popup?

⋮
Apparently, it is not possible anymore. I tried to dock it and then manually undocking. It just goes into pop-up mode.

⋮
From Mathworks support:
1. On the Home tab, in the Environment section, click Layout.
2. Then, under Show, select Command History. It has three options - Docked, Popup or Closed.
Select the docked/closed option to avoid the command history window from popping up subsequently.

Justin on 7 May 2014
⋮
Edited: Justin on 7 May 2014
One way is to press the up arrow in the command window so the history shows up. Then you can right click the bar on the top of the history popup window and choose to dock the window.
That should solve any annoyance with the default behavior.
Also, to change it back or open it if it is closed you can go to:
Home Tab > Environment Section > Layout > Command History
and choose docked, popup, or closed. (The section names are at the bottom of the tab area.)
Source: http://www.mathworks.com/help/matlab/matlab_env/command-history.html

⋮
I find the popup disturbing and I seldom use the command history anyways, so here's a snapshot (under the Home tab): 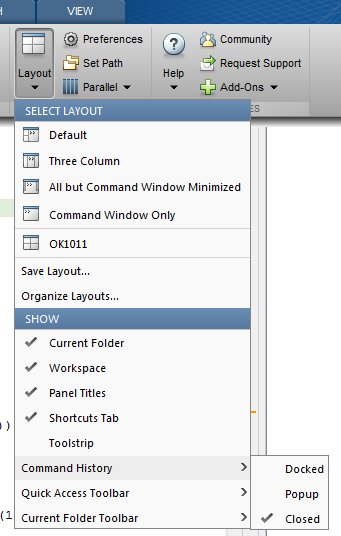 ⋮
Thank you so much that window was driving me INSANE.

⋮
Thank you!!! I hate that little window. It always covers what you want to see...

⋮
Thanks for sharing this tip!
Note to Matlab developers:
It is absolutely essential that new features like this can ALWAYS be disabled. Although I acknowledge the utility of features like the pop-up command history window for some users, many others see them as unwelcome distruptions to long-established work flows. Speaking of which, if anyone knows how to disable the inane tooltips in the Matlab editor, I would love hear about it. I can't tell you how many times these useless messages have blocked the content I really wanted to see.

Jon Northup on 24 Aug 2019
⋮
It IS still possible to have the Command History become a seperate stand-alone window. Justin helped me find the best way (successful using 2018b):
Enjoy!

⋮
THIS SHOULD BE THE ACCEPTED ANSWER!!

Leena Singh on 19 May 2017
⋮
Thank you Justin for vocalising your dislike of this and thank you Mathworks Suppport for showing how to squash it. I loathed the damn thing enough to consider reverting back to R2013 so i could go back to a pop-up free existence.

⋮
Fundamentally, I think the user would expect "undock" to actually undock the window rather than change the mode to popup. At times I have commands that I would like to select adjacent to the IDE.

⋮
I agree that this new "pop-up" mode is not the same as "undock". If some people like it, it should be a seperate mode. Even the initial default is OK, but let me have an option to do it as before. "Undock" for the Command Window doesn't make it disappear, it just becomes its own stand-alone window. That seems more to me the natural sense of "undock", as it was in older versions, and is with competitor IDE's and tools.
I use multiple versions of MATLAB to generate code that has agency approval linked to the particular version of code generation tools used. That means when behavior issues like this change over time, I notice more than most, because it's right in front of me and I get frequent reminders. Usually, I can account for syntactical changes made over time so that scripts are backward-compatible to older versions. But having something change that can never be made to work like it did before just seems wrong.