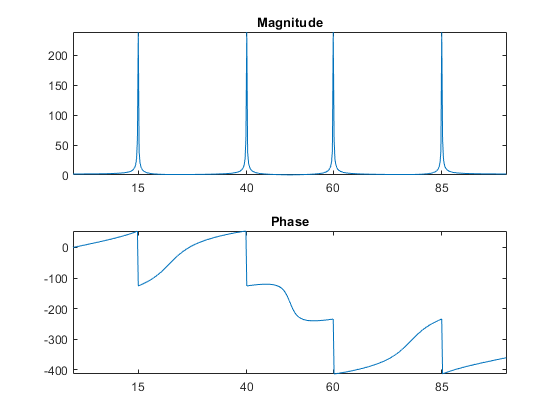 I have problems understanding the second plot above. Why do the phases look discontinuous at the frequencies with peaks in magnitude? How can I determine the desirable initial phases from the plot?

⋮
What is meant by "desirable initial phases"?

⋮
Hi David,
The code comes off the doc page in the link posted in the question. 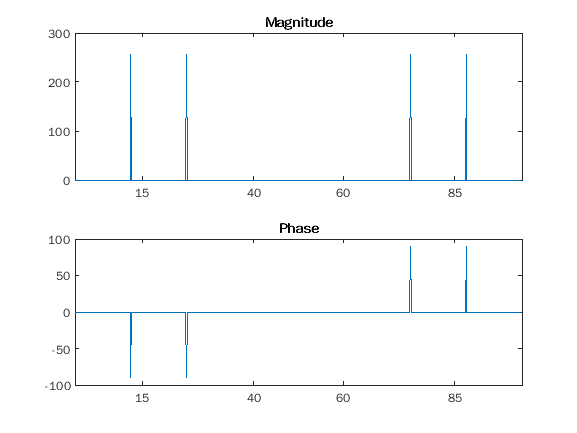 David Goodmanson on 12 Nov 2021
⋮
Edited: David Goodmanson on 12 Nov 2021
Hello JL,
Since
sin(2*pi*f*t) = ( e^(2*pi*i*f*t)-e^(-2*pi*i*f*t) )/(2i), (1)
the sine signal has both positive and negative frequency components. The frequency plots have f=0 as the first point in the array, so the positive frequencies f=15 and f=40 appear in the lower half of the plot, and by the properties of the fft, the negative frequencies f =-15 and f = -40 appear in the upper half as +85 and +60 respectively.
oo The first part of the code you cited with n = 1000 instead of 512, has an exact number of cycles in the time array. In the frequency domain you get spikes at +-15, +-40 and zeroes everywhere else. The amplitudes at the splkes are pure imaginary because of the factor of i in the denominator of (1), so the phase is +-90 degrees there. Pretty straightforward. Everywhere else the amplitude is 0, and Matlab uses 0 for the angle, although the answer should really be NaN. Wrong of Matlab not to use NaN in my opinion, but there you are.
oo The second part of the code cuts the points to 512. Now there are not an exact number of cycles in the window, so the peaks broaden, and there are four 180 degree drops. That means as a function of frequency, a factor of -1 appears when crossing those locations.
First of all, those drops have nothing to do with phase wrap. If you edit out the unwrap function you will se that there is a true 2*pi phase discontinuity at the center of the plot (removed by unwrap), but the same four drops are still there. Taking a positive signal frequency f0 as an example, and approximating the fft with an integral for simplicity, the fft is
g(f) = Int{0,a} e^(2*pi*i*(f0-f)*t) dt
where 'a' is some value appropriate to 512 points. The result is
g(f) = ( e^(2*pi*i*(f0-f)*a) -1 )/(2*pi*i*(f0-f))
= e^(2*pi*i*(f0-f)*a/2)*sin(2*pi*(f0-f)*a/2) / (pi*(f0-f))
The first factor has slowly varying phase. The sine factor is real and does not affect the phase. But the denominator changes sign as you cross from f<f0 to f>f0. Hence the 180 degree drops.

⋮
When sinusoid signal frequency does not correspond to the integer frequency bin and when the signal length is not the same as the fft length (windowing effect), the fft of the signal is no longer an ideal peak at the signal frequency. Furthermore, the computatioal accuray may also play a part. In the end, one will see some small value at other frequency bins (in a quite unpredictable manner). The peak in spectrun is no longer delta function and it beomes widening (which is actually of sinc function). As it is mentioned, those small values are artifacts and computational errors. The phases of these small values are generally meaningless (as you have pointed the phase should be NAN if the amplitude is 0). So the only meaningful interpretation of phase is at the peak (a perfect peak) which has (90 or -90 deg for sin function). Around the non-ideal peak, the phase may change very rapidly. The original signal x = sin(2*pi*15*t) + sin(2*pi*40*t); does not have perfect peaks and the phase can be difficult to predict and interprete (sure you can compute it as in the program).

⋮
Hello Chunru,
Whoops, I meant to address my answer to the original questioner, JL, and have modified my answer accordingly.
In the 512 point case, though, I don't believe that computational error is involved or that the results might be unpredictable. In the 512 point case the magnitude in the frequency domain has a maximum of 239 and a minimum of .288, only 830 times less and not near zero. As you say, the phase can change quickly around the peaks, but here the phase is quite smooth in the domain between the drops. I believe that while the phase curve may not be obvious, the phases are correct at all frequencies.