how to view 4D-single Image

mohd akmal masud on 6 Jul 2022
⋮
Commented: Walter Roberson on 7 Jul 2022
Dear All,
I have 4D-Single types of images.
How to view it?
my images can get as link below
https://drive.google.com/file/d/1GCzMLMV6FUqLE9HCf8avCNhwDKpydGvS/view?usp=sharing https://drive.google.com/file/d/1GCzMLMV6FUqLE9HCf8avCNhwDKpydGvS/view?usp=sharing

⋮
I don't have any idea sir.
Because I tried to open in volume viewer apps, but cannot. It said that must singleton and 3D 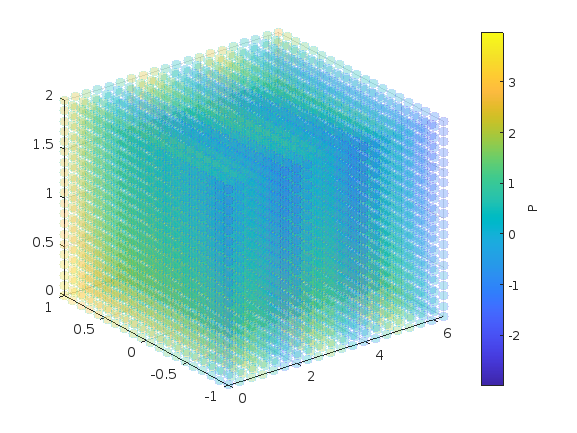 I don't think the markersize representation can be said to work out there.
... And, besides, with there being a grid of X Y Z W, there are multiple W values for each particular (X, Y, Z) triple, so you are trying to distinguish a dimension of values according to the size of different markers that are all overlayed at the same X Y Z position. I think that is unlikely to be understandable at the best of times. Perhaps if you happened to be working with a scattered points rather than a regular grid... but you are not, you are working with a grid.
You can play with exactly which dimension is encoded which way, but you end up with the fundamental problem of having multiple points (corresponding to the W dimension) at the same (X, Y, Z).
Unless you can somehow figure out a way to encode the W dimension as a sort of second perspective, you have fundamental problems making something comprehendable.

⋮
A common work-around for these issues is to represent one of the dimensions as time -- that is, to create an animation.

Constantino Carlos Reyes-Aldasoro on 7 Jul 2022
⋮
Edited: Walter Roberson on 7 Jul 2022
Hello
It depends very much what you want and where you data comes from. A 4D data set may be a 3D + time data set and thus you could display partially your data by selecting just some 2Ds, for example
imagesc(yourdata(:,:,1,1))
and change the dimensions to see other slices. Now, that is limited and will not allow you to analyse volumes or other interesting things. I have written a book about Matlab for image processing and in the last chapter there is a section about 3D graphics. Have a look:
https://onlinelibrary.wiley.com/doi/book/10.1002/9781118657546
PS you may need access from your institution to view the chapters.