Chiranjeevi Viswa Teja Jupudi on 23 Sep 2022
⋮
Commented: William Rose on 28 Sep 2022
Disclaimer: This is question is more about signal processing and less about the code that does said processing. I'm a beginner at all of this.
I am working with vibration data from accelerometers recorded at a sampling rate of 1600 Hz and the vibrations are induced by a source within the range of 20-40 Hz. I snip out about 60-80 seconds of data and use it for analysis.I have the following work flow to perform some basic analysis on this vibration data, where I run the data through a series of digital band passes (all 5Hz - 500Hz) and integrate it: 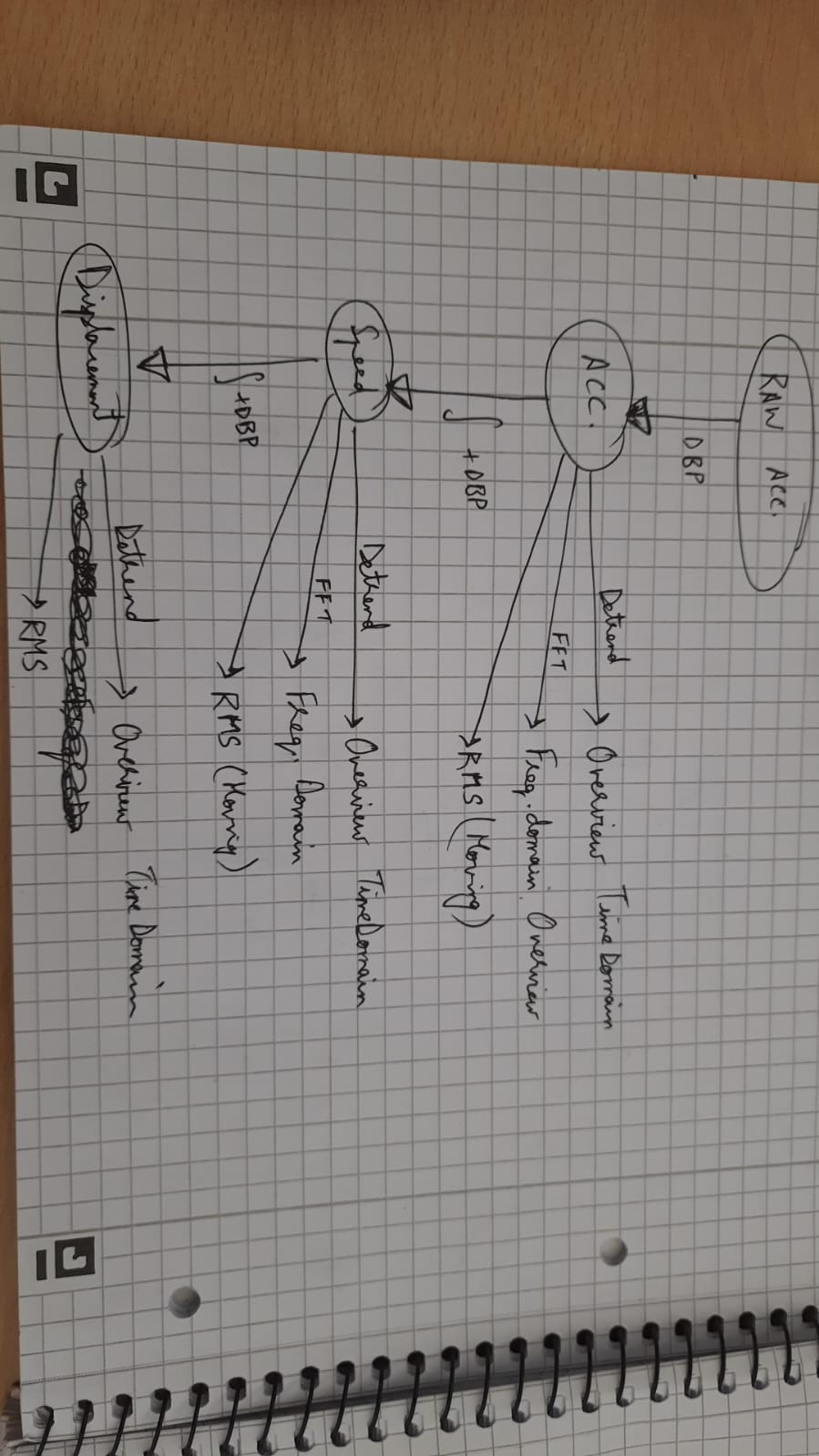 I am able to generate plots that look this this:

My questions are:
Thank You!

⋮
Yes, by snipping you are performing a window operation with a rectangular window. As the rectangular window has a very sharp edge you are losing some data at the edges. That is causing the issues at the edges. One way of reducing the edge effects will be to use windows like hamming, hanning, etc that do not have sharp edges. As these windows have gradual roll-off, they won't cause any increase in value at the edges.
I do not see think adding of subtracting the mean is going to solve the problem. The mean is just the value you get at the DC frequency. Adding and subtracting will impact what you see at the zero frequency.

⋮
Thanks for your answer!
Just a small follow-up question about the windowing:
Is it mathematically ok to first snip my data like I have been doing (i.e. effectively a rectangular window), and then using an appropriate windowing function suitable for the data that I have?

William Rose on 25 Sep 2022
⋮
@Chiranjeevi Viswa Teja Jupudi, Is the first time-domain Acc signal which you plotted the raw signal? Or is the plotted Acc signal the signal which you get after the initial digital band pass (DBP) filter? I suspect it is the latter. A DBP uses past values of the signal (and future values, if it is a non-causal filter) to compute the output. I suspect your DBP is using both past and future values, because you have transients at both ends. At the ends, the DBP filter in essence subsitutes an input value of 0, when the filter window extends beyond the edges of the recording. This produces transients, if the mean value of the raw signal is not zero. The duration of the transient can be suprisingly long it the filter is an IIR filter rather than an FIR filter. I used to see this when applying a 60 Hz band-reject filter to get rid of power-line-frequency frequency noise. (Power line frequency=60 Hz in USA. I was using a band-reject filter, not band-pass, but the principle is the same.) Two options for fixing this problem are:
The transients in the velocity and displacement signals are due to integration of the transients in the Accel signal. If you fix the Accel signal, then you should not have transients in the volocity or displacement.
Double integration of acceleration can lead to interesting reslts, if the recording is long and if there is any baseline offset or drift in the acceleration signal. When I double-integrated acceleration signals from ice skaters, the results indicated that they had skated to an adjoining town by the end of practice, even though they were in fact still on the same ice rink :).

⋮
Edited: Chiranjeevi Viswa Teja Jupudi on 27 Sep 2022
Thank you William for your insightful answer! You're right, the first time domain Acc-signal is the one after the DBP!
I now figure that removing the mean before the filter and adding it back into it makes more sense.
However, I have a follow up question to this suggestion : When I do integrate my acceleration signal, should I be using the raw signal or the signal that is sent through the DBP (correctly by removing the mean and addding it back)?
Will it make a difference?

⋮
@Chiranjeevi Viswa Teja Jupudi, INtegrating the raw versus filtered Acc signal will give different results, because the DBP remove power in the signal at low and high end frequencies. So you either would (with raw Acc) or would not (with DBP Acc) have those frequencies contributing to the velocity and displacment results. Is the difference important? I can;t say. I woudl try it both ways and decide which you like better, based on your understanding of the system.
When you add the mean accel back in, you just add mnAcc*t to velocity and mnAcc*t^2/2 to displacement. I assume this is a uniaxial acceleraomter. If the accelerometer is aligned so that there is even a small component of the gravity vector aligned with the acceleromter axis, then that will be an acceleraiotn offset that will throw off your results. You can watch out for that and deal with it as you think best. Whn I worked with acceleration signals from 3-axis acceleromters mounted on a motor, drift was not a problem, because the recording was very short. That was also true when I worked with head acceleration signals (3 axis rotational and linear) during soccer heading.

⋮
@William Rose
Thanks again for your comments. Incidentally, I just did what you suggested and it turns out integrating the filtered (bandpassed) signal works better for me. I also found that the solution no.2 from your answer works better for me than the first one.
You're right about the drift, which I already observed when I first roughly integrated my data as a prelim analysis. I did work around it by detrending the output signal before plotting. And it looks quite acceptable, so far. Besides, the relevant length of the signal in my case is about 60-80 seconds, which could also be why I see the drift.
That's a nice littel tip about accelerometer axis orientation. Because I do use 3 axis sensors, which are placed pretty much unsupported in a matrix of other solid bodies. But luckily, I already know what are the approximate nature of accelerations I am expecting to see in each direction. Some of these accelerometers which are susciptible to rotation also have a gyro recording the angular displacements that I can fetch and correlate with any discepancies that I find in acceleration data. Further, I also have a record of the orentation of each sensor at the start and end of the observation which helps as another way of check, esp for the sensors that have no gyro.
All in all, I thank you very much for your insightful comments and answers! It was very kind of you to contextualise everything for me at each step!

⋮
@Chiranjeevi Viswa Teja Jupudi, you're welcome, and thank you for your kind comments. Good luck with your work!