NC on 5 Jun 2015
⋮
Commented: Francesco Giuseppe Fornari on 11 Nov 2019
Accepted Answer: Azzi Abdelmalek
As this seems to be a quite common problem, I have spent a while trying to find a suitable answer for my case in other posts. However, most of them are full of maths and I cannot see the solution very clear.
This is my case:
I generated a function that imports data into Matlab in form of a table. The table looks like: 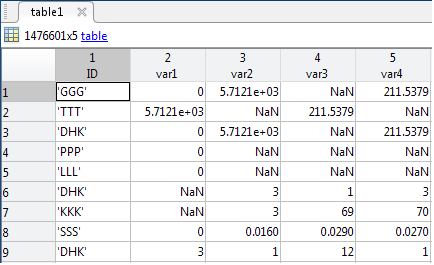 This table has around one million of rows. Basically, I need to extract from this table just the rows where the table1.ID matches 'DHK' and leave the result in another table.
This is the code I have just now:
cont=0;
for p=1:length(table1.ID)
ID=table1.ID(p,1);
IDstr=ID{1,1};
if strcmp(IDstr,'DHK')==1
cont=cont+1;
var1(cont,1)=table1.var1(p,1);
var2(cont,1)=table1.var2(p,1);
var3(cont,1)=table1.var3(p,1);
var4(cont,1)=table1.var4(p,1);
end
end
table2=table(var1,var2,var3,var4);
This code works but it takes extremely long time as I am dealing with a million of rows and many import files. There migth be a better way or command that automatically finds the information that I need instead of looking for it line by line?. I found this MATLAB link on the documentation but I am not sure how to apply it for what I need: http://uk.mathworks.com/help/matlab/matlab_prog/find-array-elements-that-meet-a-condition.html
I would be very grateful if somebody could help me.

⋮
I want to do the same thing as asked in this question except that I want to look for more than just 'DHK'. I want to search for 'DHK' and, say, 'ABC' at the same time without writing a loop.
I want to avoid having to write the following:
out=w(ismember(w.ID,'DHK'),:)
out2=w(ismember(w.ID,'ABC'),:)
I have several thousand of these variable like 'DHK' and 'ABC' in a table. I want to search without writing a loop to create one table with all the occurrences of these variables. I need it in just a few lines if possible. I need the results of 'DHK' and 'ABC' in the same table.
Thanks!

⋮
hi,
what if I wanted to find 'DHK' without knowing in which columns it can be?
I've got multiple csv files, where I need to find the same string.
thanks

Peter Perkins on 5 Jun 2015
⋮
First convert those highly repetitive strings to a categorical variable:
table1.Var1 = categorical(table1.Var1);
Type whos before and after doing that and watch your memory use decrease. Then do more or less what Azzi suggests, leveraging the categorical equality operator:
table2 = table1(table1.ID == 'DHK',:);
That's it!