Steven on 25 Jun 2015
⋮
Commented: Image Analyst on 26 Jun 2015
Accepted Answer: Image Analyst
What is the relation between "Light" intensity and "Image" intensity?
Is there any reference that I can rad about it? I searched a lot, but couldn't find any!
Thank you so much.
Steven

Image Analyst on 25 Jun 2015
⋮
Welcome to the very confusing field of optical units. An image does not have units of intensity. See the table of the bottom of this page: https://en.wikipedia.org/wiki/Candela I'm surprised you couldn't find anything because there is tons of information out there, unfortunately it will make your head spin unless you have a Ph.D. in optics (sometimes even if you do, speaking from personal experience). The units of an image are like joules, or in photometric units lux*m^2*seconds, which is lumens*seconds, which is candela*steradian*second (to get it into all base SI units). Anyway, think of it as a measure of energy (or luminous energy). Let's use regular radiometric units instead of photometric (luminous) units (which are restricted to the human visual range and a lot more complicated). So you have optical power hitting your sensor. Like 10 watts over an area of 1 cm by 1 cm. Now the CCD well integrates those photons. Each pixel might be 5 microns by 5 microns. So now we have watts per area multiplied by the area. That's how many watts are integrated by that pixel. But the pixel only integrates for a certain number of seconds, and watts is joules per second, so you have watts*seconds = (joules/second)*second = joules. That's why I say it's like joules or energy.
OK, that's more than you wanted to know, so I won't even bother to go into the "intensity" of a light source which is even more complicated. Even the "experts" don't agree. For example the American Institute of Physics says that the "intensity" of a light source is W/steradian, yet intensity is an SI Base quantity (like meter, kg, second, ampere, kelvin, and mole) and it's units are candela. My late optics professor, Jim Palmer of the College of Optics at the University of Arizona, got so worked up on the sloppy usage that he wrote a paper on it: "Getting intense about intensity", Metrologia, 1993, vol 30, pp. 371-372. I attach a partial screenshot of his paper, for educational purposes. 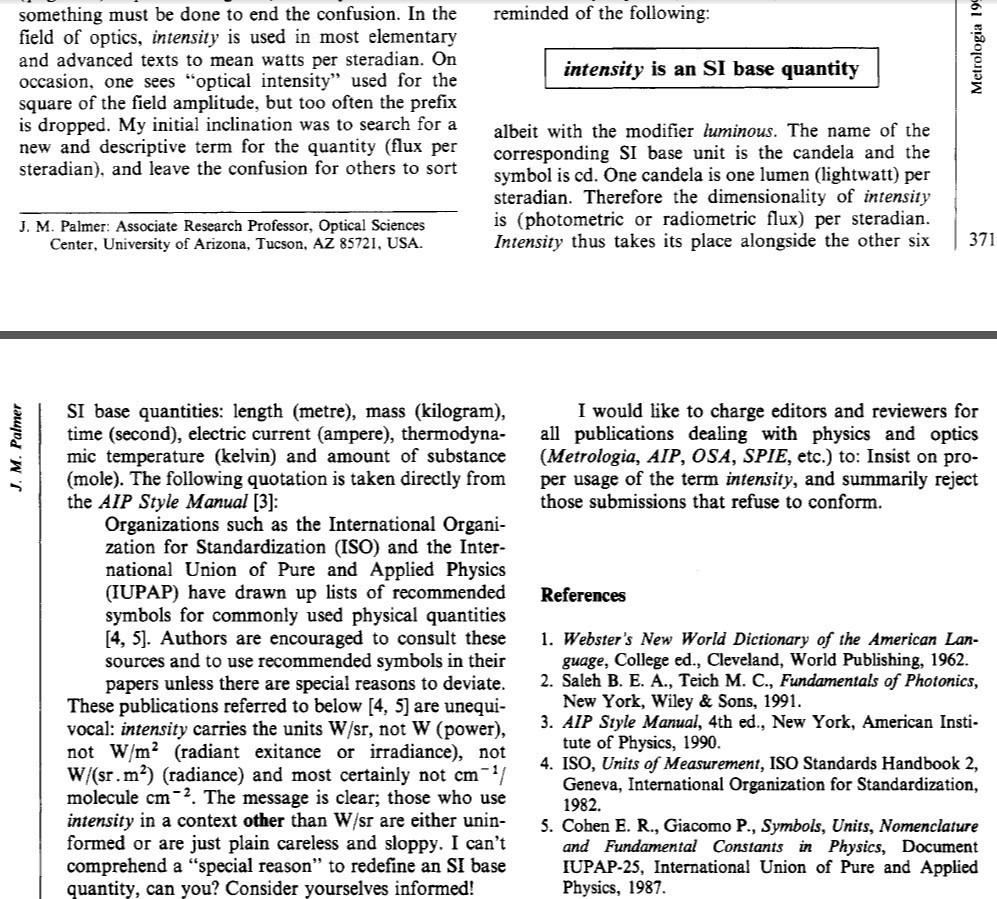 ⋮
Thank you Image Analyst for the comprehensive response. Yes! It does seem complicated! and Thanks for the paper too.
As I said my main question was how I can relate these the light intensity and gray value. Thus, I think they are linearly related (Is there a solid reference for this?) for which the proportionality factor depends on the sensor properties etc. Right?
Thanks again!

⋮
Unfortunately that's not always true. Although a CCD is a linear device, some cameras impose a "gamma" power law onto the digitized gray level. Sometimes you can even tell it what the gamma to use. A linear system would have a gamma of one. Sometimes you have an offset, like a gray level of 20 when there is no light hitting the sensor. If you plot the output gray level versus the input reflectance, if you get a straight line...it might not be linear. I know that's hard to believe, that a straight line transfer function is not linear, but it's true. A linear system means that twice the input gives you twice the output and that is not the case unless the line goes straight through the origin with no offset. So to characterize your system, you need to put down an object with known percent reflectances, like the x-rite ColorChecker Chart or other similar standards, and measure the gray level, and plot gray level vs. true percent reflectance. Then, knowing that transfer function, you can linearize your system.

⋮
Thanks!
Based on your experience, which of the following is a better book for studying optics?
Optics by Hecht
Optics by M.V. Klein
or any other textbook you know much better?
Thanks so much!
Steven

⋮
I'm not familiar with the Klein book. The Hecht book has been a standard introductory book for decades. It's very easy to follow and understand.

Guillaume on 25 Jun 2015
⋮
Edited: Guillaume on 25 Jun 2015
Assuming your image come from a camera, the Image intensity == the pixel values is proportional to the amount of light (the Light intensity) that has reached your sensor. The relationship between pixel value and amount of light may very well vary from pixel to pixel, and for a colour sensor will definitively vary from colour to colour. The camera vendor should be able to give you the spectral response of the camera (= sensitivity in each colour) and you can calibrate the individual pixel response with a uniform light source.

⋮
Thanks Guillaume.
My camera is not a color one. So I guess the relation would be simpler for black-white camera.
The light is also a laser light with known wavelength.
My question is, having the camera's properties (sensor type, depth, exposure time etc), how can I relate them to the image intensity? what is the general relation?
Thanks!
Steven

⋮
Note that this is very off-topic for this forum.
For a monochrome sensor, the amount of light received by the sensor is simply proportional to the pixel value. The proportionality constant varies from pixel to pixel though. If you want to know what that is, you will need to know the spectral response of your sensor at the wavelength of your laser and at the wavelength of a uniform light source that you'd use to calibrate your sensor.