Ines on 16 May 2012
⋮
Commented: William Rose on 16 Jun 2022 at 2:26
Accepted Answer: Mike Croucher
I want to assess the GOF of a given dataset to a variety of different distributions (i.e. exponential, lognormal, normal etc) using the Anderson-Darling test-statistics. Unfortunately, this doesn't seem to have been implemented in Matlab, so I was wonderung whether some of you might have a function that does exactly this?

⋮
I second this question. I am trying to use the Anderson-Darling test to determine GOF of a Generalized Pareto Distribution.

⋮
Greetings
I'm new to Matlab and to statistics.
I have a data table in the form of time series (column-oriented variables). I did the Anderson-Darling test with the following distributions: 'norm', 'exp', 'ev', 'logn', 'weibull'?
I read https://ch.mathworks.com/help/stats/adtest.html, I learned that I don't need to specify population parameters.
My problem starts when I try to do the Anderson-Darling test with Nakagami, Gamma, Beta and others that are not 'norm', 'exp', 'ev', 'logn', 'weibull'.
I noticed that there is a need to include parameters. I have no idea how I can do this.
Can anyone kindly help?
Attached is the type of error that matlab gives me

⋮
Here are the scripts I used to test adtest.m.

⋮
@William Rose You can accept answers to this question because of your high community reputation level. The list of priviledges, and the number of points needed to get them, is at https://in.mathworks.com/matlabcentral/answers/help?s_tid=al_priv
The OP has 7 days to accept an answer, after which anyone at the right level can do it

William Rose on 10 Apr 2022
⋮
@Ines, @Debbie Green,
Calculating the AD statistic is straightforward, and the attached function does it. Figuring out the p-value associated with a given AD statistic is not straightforward. The attached function does it, but beware. This 2018 paper gives a formula for the p-value (Table 3). They cite a textbook from 1986, which I don't find online. They say this formula is supposed to work no matter what distribution is being tested. However, I have tested their Table 3 formula with Monte Carlo simulation*. The tests show that the Table 3 formula gives very wrong answers if the data is uniform and the tested distribution is also uniform. The formula also gives very wrong answers if the data is exponential and the tested distribution is also exponential. The formula gives reasonable answers if the data is normal and the tested distribution is normal. By "very wrong answers", I mean that if you generate 10,000 sets of 100 uniformly distributed random numbers, and test versus a uniform distribution, about 1% of the p-values should be <.01, about 5% should be <.05, and about 10% should be <.10. But the actual number of p-values that are less, at each level, is much greater than expected. In other words, there are too many low p-values. Thus, when testing data that is actually uniformly (or exponentially) distributed, one would reject the hypothesis "this data came from a uniform (or exponential) distribution" far more often than one should. The p-values for nomal data tested versus a normal distribution appear to be approximately correct, at least at p=0.01, 0.05, and 0.10, with data sets of 20, 50, and 100 points per set.
The function that computes the A-D statistic and the associated p-value is attached: AndersonDarling.m. Note the warnings above. I am also attaching four scripts which test the function. See the comments in the function and in each script.
The 2018 paper linked above and here has references to other papers and books which may have formulas that give better results for non-normal distributions.
*I did the Monte Carlo testing with 10,000 data sets of normally distributed random numbers, with 20 data points in each data set. The I did it again with 50 and with 100 in each data set. Then I did it all again with uniformly and exponentially distributed random numbers, for 90,000 data sets in all.

⋮
@William Rose, thanks very much for the function and the helpful references. I edited your function for my personal use so that I could calculate the AD statistic with my own (k,sigma) rather than with the estimated parameters from gpfit.

.
Let's test this critical value by generating 1000 data sets with N=20 that are NOT gen.Pareto(2,1,0). To make it a challenging test, let z~Uniform(0,3), which has the same lower limit and the same median as gen.Pareto(2,1,0). Let's see if the AD test with the specified critical value rejects the null hypothesis for most of these data sets.
>> z=3*rand(1000,N);
>> for i=1:1000, [AD2(i),~]=AndersonDarlingKnownPar(z(i,:),'GPD',2,1,0); end
>> disp(sum(AD2>ADcrit)) %count the AD stats that exceed ADcrit
946
946 out of 1000 data sets got rejected by the test, because their ADstat exceed the critical value. This was true even though the data sets had the same lower limit and same median as the hypothesized distribution. It is kind of a coincidence that the rejection rate is 95%. If the sample size were larger, the rejection rate would have been higher, I bet. (But if the sample size is larger, you should recalculate the critical value, ADcrit, because it may depend on sample size.) If the test data's distribution is more similar to gen.Pareto(2,1,0), the rejection rate will be lower. For example, if y~Expon(2.164), which also has a lower limit of 0 and a median of 1.5, only 15% of data sets get rejected by the AD test, with ADcrit=2.5043. This indicates that it is hard to distinguish an exponential distribution from genPar with shape=2, if you only have 20 data points.
The attached script computes the AD statistic (and the p value, but I don't trust the p value if the distribution is not normal) when the distribution parameters are specified by the user, rather than fitted. I assume your script is similar.
Good luck.

⋮
Thanks again. @William Rose, I understood the logic of using the Monte Carlo (MC) method to test the null hypothesis rather than comparing the function-generated p-value to 0.05. I will incorporate that critical value calculation routine into your "AndersonDarlingKnownPar.m" function.
In general, I'm more interested in observing the change in the Anderson-Darling statistic as I change the theta parameter in the GPD fit. But having the associated p-value is very helpful in my experiment.

⋮
Ran in:
@Debbie Green, you;re welocme.
Despite my bias in favor of my own scripts and functions :), I think Matlab's adtest() is superior. It is fast. It computes a critival value for the AD test, for a gen.Pareto distibution with known parameters, analytically. (I don't know how, but it does.) Here is an example of how you can use it and evaluate it. You can obviously modify this to address your interest: "observing the change in the Anderson-Darling statistic as I change the theta parameter in the GPD fit":
M=10000; N=20; %M=number of data sets, N=number of values in each set
x=random('Generalized Pareto',2,1,0,[M,N]); %generate randoms with specified distribution
pd=makedist('Generalized Pareto',2,1,0); %create a probability distribution object
h=zeros(M,1); p=h; adstat=h; cv=h; %allocate arrays
%next line runs the adtest M times on the M data sets
for i=1:M, [h(i),p(i),adstat(i),cv(i)]=adtest(x(i,:),'Distribution',pd); end
histogram(p) 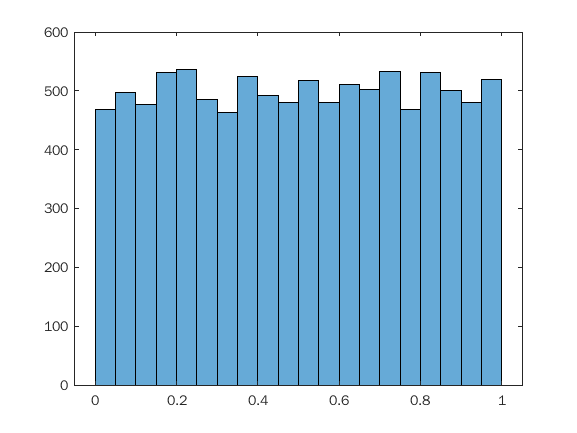 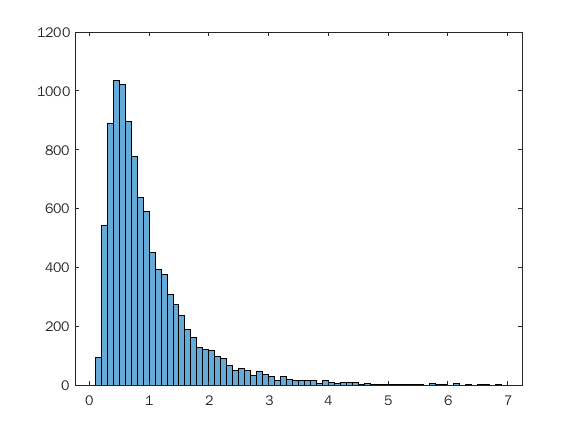 disp([sum(h) sum(p<.05) sum(adstat>cv(1))]);
469 469 469
Inspection of vector cv (critical value) shows that all the values are identical. This confirms that adtest() computes the critical value analytically, rather than by Monte Carlo. If adtest() were computing the CV by Monte Carlo, the CV would be a litlle different every time.
The histogram of p values appears flat, as we expect it to be. That is reassuring.
The histogram of adstat does not look crazy.
The display of the sums of h, of p<.05, and of adstat<cv(1) show that it adtest() is working as expected, and that h is true if the null hypothesis is rejected. Since the null hypothesis is true in this case, and since alpha=.05 by default, we expect 500 rejections (since there were M=10000 tests). The variance (using the binomial approximation) is