Optis Consultants Inc. on 7 Nov 2018
⋮
Answered: Ali Moshrefzadeh on 26 Jun 2019
Accepted Answer: Michelle Hirsch
Hi,
I'm missing the plot tools button in my figure in the last Matlab 2018b release. Does anyone know how to make it appear again? Even when I'm running the plottools command, the figure just closes. Did they remove this tool?
Thanks

Michelle Hirsch on 9 Nov 2018
⋮
Plot tools are still there, though we are starting to favor workflows like using the new inspector (now the last button on the figure toolbar). You can bring back each of the three components of the plot tools using the figure View menu. 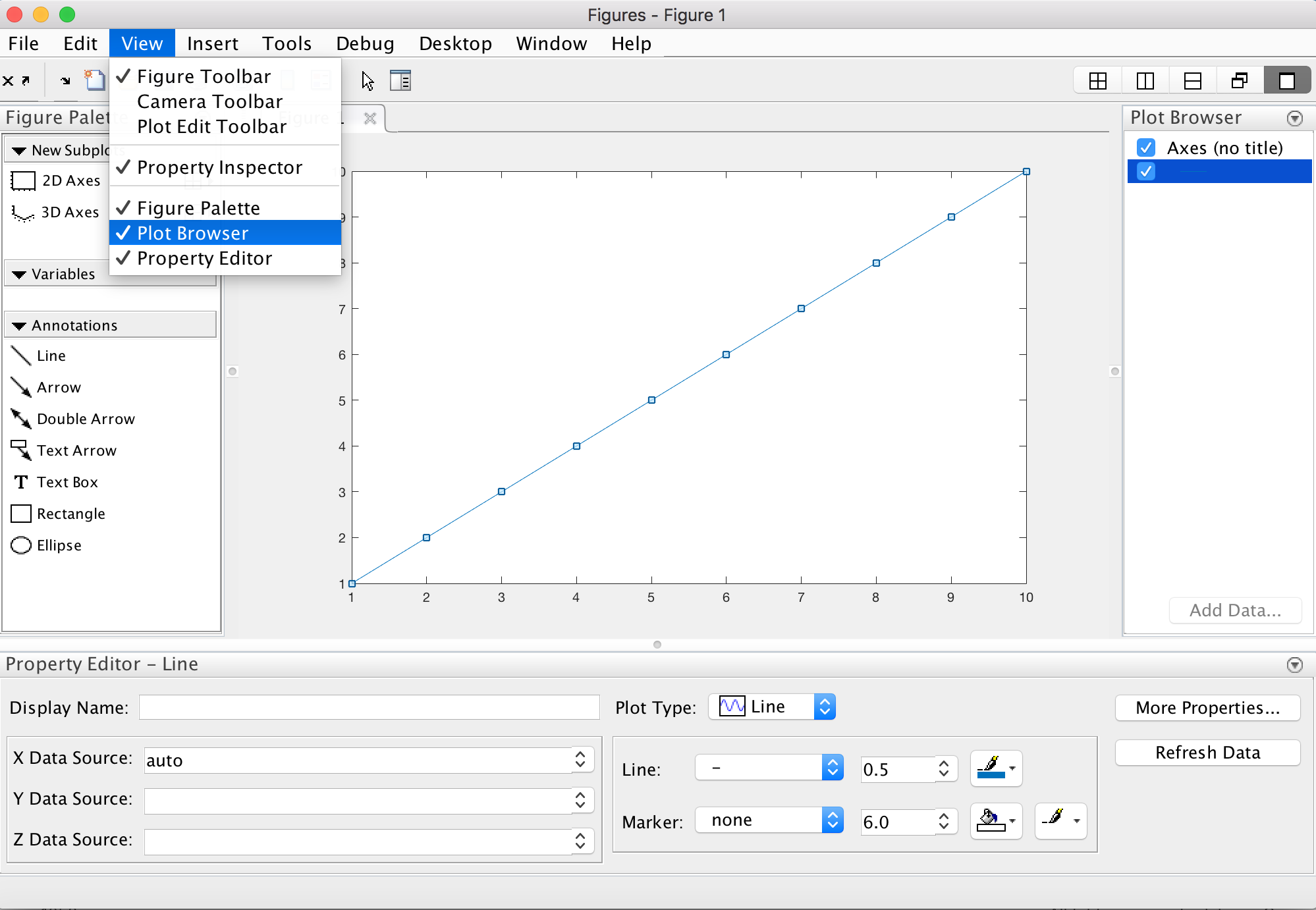 ⋮
Thank you, Michelle. This is terribly inefficient, however, especially if you use plot tools frequently.

⋮
So annoying!
You have to repeat the whole process for each figure.

Sarah on 6 Mar 2019
⋮
Just wanted to add to this. I use the Plot Browser constantly to turn on/off different sets of lines (I often don't know which results will be the most useful until I look at a lot of them) and as a pseudo legend (I turn off the real legend because it doesn't work sometimes with the number of lines I plot at once). I also use the plottools docked capability as a great way to switch between plots quickly.

⋮
Thanks for the input, Sarah. What do you mean by this comment:
"I also use the plottools docked capability as a great way to switch between plots quickly"?

Sarah on 7 Mar 2019
⋮
So here's an effort to show both at once. I'm using the Plot Browser as a legend and too turn things on and off (sometimes I'll make a whole group of lines one color or linestyle as well). You'll see that I have 7 figures docked here. That's not unusual for me. I often have more figures at one time (anything up to 15 is typical). I'll generate via a script and set them to specific figure numbers (not so much in this example - only the 101 and 102 fall into that category). The next step might might involved me reading results for a variation and I would plot those as 201 and 202. Let me lay out the scenario more specifically below the image. 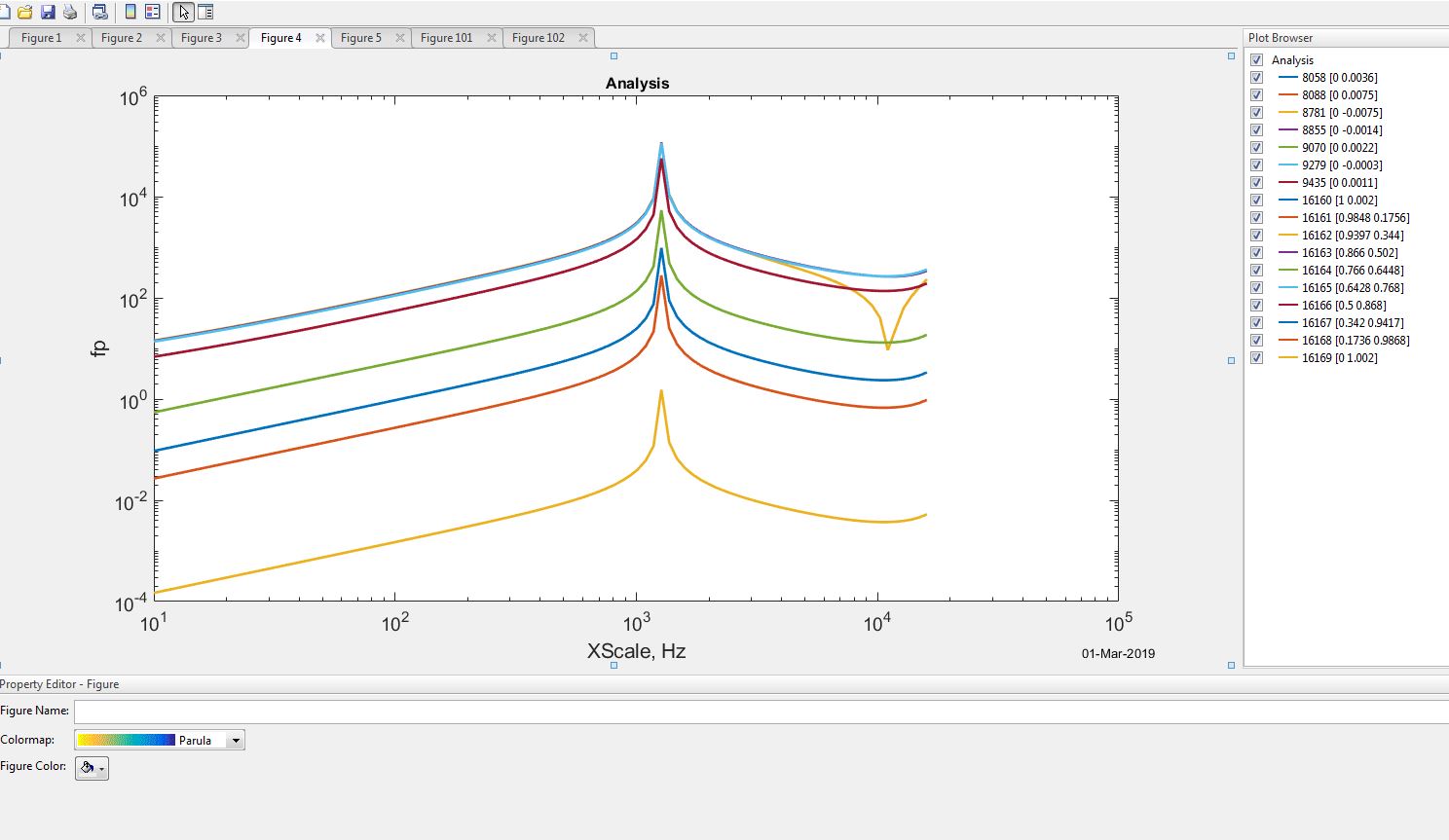 1) Run a model in a finite element solver.
2) Run a postprocessing script in Matlab that reads the resuts, modify as needed, and plots into specific figure numbers, say 100-105. 100 might be pressure, 101 power, 102 impedance etc.
3) Dock those figures in the plottools window.
4) Run a variation of the model.
5) Run v2 (which is the same as v1, just with a different model name and results file as I usually write the scripts to take those two pieces of info at the beginning and everything else below is variable names) of the postprocessing and plot into 200-205.
6) Dock those figures.
7) Use the plottools interface to jump quickly between 100/200, 101/201, etc. to compare changes in the results. That let's you easily see how the frequency or magnitude or shape changed from one version to the next.
8) Use the Plot Browser as a legend since there might be 40+ lines on the plot and as a way to turn off currently undesired lines (and then turn them back on when I want to look at that part of the results) or change color/style.
9) Possibly update scripts to explicitly plot what I've been testing manually (in terms of color, style, which lines etc.) in the Plot Browser.
10) Run more models and repeat.

⋮
Thanks, this is super helpful!

⋮
Happy to chat anytime or visit in person. I'm right down the road from you in Framingham. :)

⋮
See my post below. Should help you add, edit, and hide buttons to the toolbar.

Scott Nuccio on 26 Jun 2019
⋮
See my post here:
https://www.mathworks.com/matlabcentral/answers/419036-what-happened-to-the-figure-toolbar-in-r2018b-why-is-it-an-axes-toolbar-how-can-i-put-the-buttons
and
https://www.mathworks.com/matlabcentral/answers/100561-how-do-i-customize-a-figure-toolbar-by-removing-certain-buttons
should help you add, edit, and hide buttons