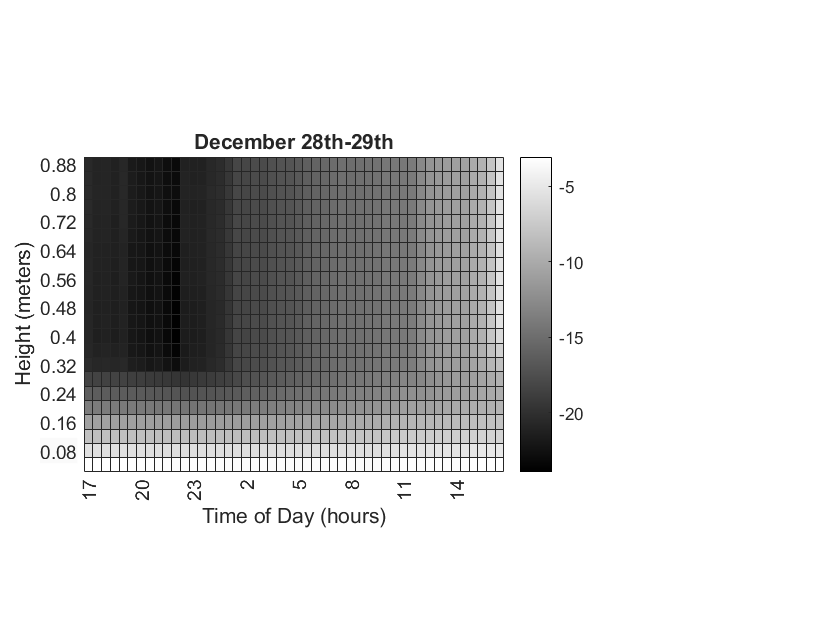 ⋮
" the x-labels on my heatmap are showing up vertically. I can't find the reason for this..."
The reason is that there are so many initially before you thin them out it tries to make fit as best it can.
Try commenting out the lines after the call to heatmap to see what looks like before...

⋮
Right, that's why I added those additional lines because it was completelly illegible before since there were far too many values. So, once I have it displaying as is, is there a way to rotate the labels? I need all the columns of data displayed, and heat map requires the number of x labels (yes, labels, not just values) to be the same as the number of columns mapped, so I haven't been able to find another option for this.

⋮
That's the ticket with struct! I was unaware of being able to do that.
Same thing in the end a little more directly; problem now is OP says has no effect on her plot.
But so far she hasn't provided full working example that illustrates the problem on her system to verify here.

⋮
I tried adding hAx.XAxis.TickLableRotation=0; and it did not give an error message but the labels are still printing vertically. I tried different rotation values but still no change. Do I need any aditional commands?

⋮
You have to retrieve the handle to the axis...to do that you have to follow the steps I outlined above of first saving the handle of the HM object, then retrieving the axis handle from the NodeChildren array and then using that axis handle...
Using your variables above, it would be something like
hHM=heatmap(xx, snow_height,snow11, 'Colormap', gray);
hAx=hHM.NodeChildren(3);
hAx.XAxis.TickLabelRotation=0;
If you just used gca or tried to just set property of current axis, that's the problem--TMW has hidden the axis handle you need and gca will only return the HM graphics object instead. If you didn't retrieve the handle first, the above code will have created a struct variable hAx with fields as given and assigned it the value zero. That's why it didn't error; it's still valid MATLAB code syntax, just not at all what is intended. 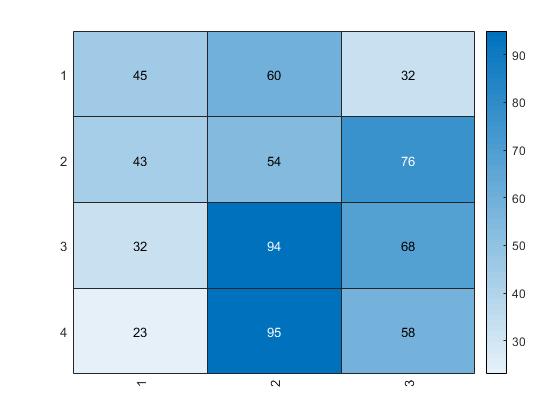 that shows the 90 rotation...
>> hAx.XAxis.TickLabelRotation
ans =
90
>>
shows did set the property and value reflects having done so...

⋮
>> hAx.TickLabelRotation
ans =
90
But setting it equal to zero doesn't change anything. I'm wondering if it's not possible because of the size of my data?

⋮
No. I did it with a sample of the same size here with no trouble.
You didn't respond with any of the info asked for nor attach the dataset so not much else can do from here.
Oh...one other. Which release of MATLAB and OS are you using? The above was done w/ R2019b here on Win platform. 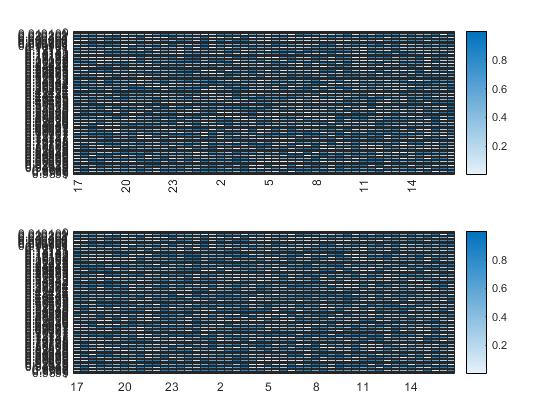 From there I did precisely the same thing for a second subplot
subplot(2,1,2)
hHM2=heatmap(xx,hh,ss);
hHM2.XDisplayLabels = tmp;
hAx=hHM2.NodeChildren(3);
hAx.XAxis.TickLabelRotation=0;
As shown, the top subplot is rotated, the bottom isn't -- like the top, it was until change TickLabelRotation property.
The difference here is there are 100 points in y so those ticks are also too thick and I just used random values for the data since didn't have the real thing. But, I don't think that's the problem -- there's something else going on you're not showing or you have a version difference, maybe.
The info asked for would perhaps show what that might be -- a complete example from scratch attached with the data would be the definitive response.

⋮
On version, I went back to R2017b; 'TickLabelRotation' works there same way as well as the axis being the last element in NodeChildren array.

⋮
Well, this is for work and it's not a public dataset, so I'm not comfortable uploading it on a public platform. I do appreciate the help though.
I'm using version R2020a

⋮
Just make a sample test case, then.
It shouldn't matter what the data are -- if you can't reproduce the above figure, then it would begin to appear you have uncovered a bug or have a system-related issue regarding the renderer and/or video driver...altho that would seem highly unlikely the cause of this symptom.
Attach a working sample script that has a problem there and I'll see if it reproduces issue here...

⋮
Or, my address is at contact site to send privately...
But, also, you never responded to the other Q? of what various whos or other queries at command line show on your system...