How do I plot 2 images, each with a different colormap and CLim in a single subplot?

Liron McLey on 6 Jan 2021
⋮
Edited: Adam Danz on 8 Jan 2021
I have the 2018a version of matlab.
I want to plot a background image and an overlaid delta image that is partially transparent in the same subplot. The background needs to be grayscale and the delta image would be some other colorful colormap, the color limits of each image are also different.
Now, I know how to do this in a single figure - you just create 2 axes, one on top of the other, and then each axes is treated seperately. You can also physically see there are 2 axes in the Plot Tools window.
BUT, when I try to do the same thing in subplot, it doesn't create 2 seperate axes, but just comes back to the original axes ploted with the first subplot(...). In the Plot Tool window you can see there is just 1 axes.
The different colormaps and CLim are essential here, I can't just use transperancy alone.
I'd appreciate your help :)
Example - the following code works great [single figure]:
figure;
ax1 = axes;
hold on;
im1 = imagesc(image1,'Parent',ax1)
colormap(ax1,gray);
ax1.CLim = [0.4 1];
axis equal; axis tight;
ax1.Visible = 'off'
ax2 = axes;
im2 = imagesc(image2,'Parent',ax2,'AlphaData',0.4);
ax2.CLim = [-1 1]*1e3;
colormap(ax2,parula);
axis equal; axis tight;
ax2.Visible = 'off';
But, replace the ax1 and ax2 with these lines and it doesn't work anymore [a subplot inside a figure]:
ax1 = subplot(1,2,1);
ax2 = subplot(1,2,1); 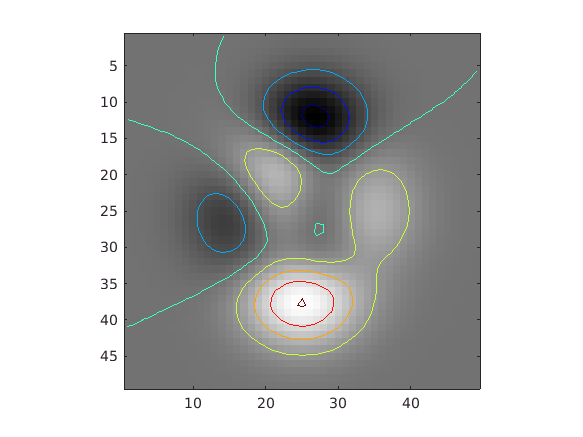 ●
You can also set two different colorbars.
Since the axis limits are linked, panning and zooming will affect both axes.