Yihao Wan on 26 Feb 2021
⋮
Commented: Kishen Mahadevan on 15 Mar 2021
Accepted Answer: Kishen Mahadevan
I want to implement the reinforcement learning block in dSPACE using code generation, while the simulink will pop out the error 'The 'AgentWrapper' class does not suppot code generation'. Is there a way how to solve it?
Or is it possible to extract the neural work of reinforcement learning agent and import it into deep learning toolbox?
Thank you very much. Any suggestions are appreciated.

Kishen Mahadevan on 1 Mar 2021
⋮
As of R2020b, the RL Agent block does not support Code Generation (we are working on it) and is currently only used for training a Reinforcement Learning Agent in Simulink.
However, in R2020b, native Simulink blocks such as 'Image Classifier' and 'Predict' were introduced in Deep Learning Toolbox, and the MATLAB function block was enhanced to model Deep Learning networks in Simulink. These blocks allow using pre-trained networks including Reinforcement Learning policies in Simulink to perform inference.
Also, in R2021a, plain C Code generation for Deep Learning networks is supported (so no dependence on 3p libraries like one-dnn), which enables code generation from the native DL blocks and the enhanced MATLAB function block mentioned above.
Using these features, steps you could follow in R2021a are:
1) Use either Predict or the MATLAB function block to replace the existing RL Agent block, and pull in your trained agent into Simulink
2) Leverage the Plain C Code generation feature to generate code for your Reinforcement Learning Agent 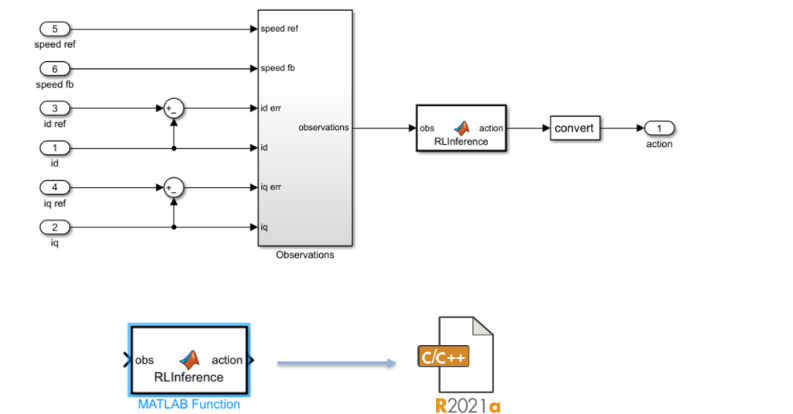 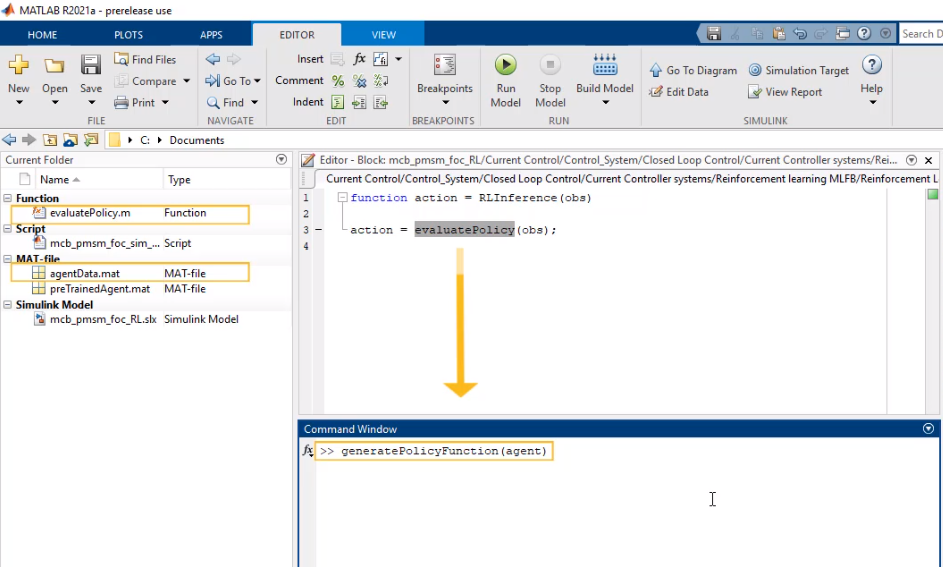 Note:
To create a function that can be used within the 'MATLAB function' block to evaluate the learned policy (pre-trained agent), or to create ‘agentData’ that can be imported into the 'Predict' block, please refer to the 'generatePolicyFunction' API.
https://www.mathworks.com/help/reinforcement-learning/ref/rl.agent.rldqnagent.generatepolicyfunction.html

⋮
Thank you very much. When using the predict block for reinforcement learning, what is the input of the block, as we know that the RL block action is determined by the observations and reward calculation.

⋮
The input to the 'Predict' block is your observations as it performs inference on the trained policy uisng the observations. The 'reward' input is not required in this case as that is used only during RL training.
Note: To load the pre-trained RL agent into simulink using the "predict' block, use the 'Load Network from mat file' option in the 'Block Parameters' and select the 'agentData.mat' file created using the 'generatePolicyFunction'.

⋮
Thank you for the reply.
How should I solve it? Thank you very much for your help.

⋮
Hello,
The issue mentioned in point 1 is very similar to this MATLAB Answer. Please refer to it for more information.
Based on that MATLAB Answers post, using the MATLAB Function block in place of the predict block resolved the issue. Since you are facing issues with the MATLAB Function block setup as well, we might need to take a deeper look into the model.
Please contact Technical Support directly by creating a service request.