Editor's Note: This file was selected as MATLAB Central Pick of the Week

This repository includes the code for the legendflex.m Matlab function, along with all dependent functions required to run it.

This function offers a more flexible version of the legend command. It offers a different method of positioning the legend, as well as options to:

This function should support all types of plot objects.

Unlike in the default legend command, where the legend is positioned relative to the labeled objects' parent axis according to one of 16 location strings, this function positions the legend based on two anchor points (one on either the figure or a child object of a figure, and one on the legend itself) and a buffer (or offset) between these two anchor points. The anchor points refer to the corners and centers of each side of the box surrounding the reference object and the legend itself; they can be refered to either as numbers (1-8, clockwise from northwest corner) or strings ('nw', 'n', 'ne', 'e', 'se', 's', 'sw', 'w'). The position of the legend is determined by these two points and the distance between them, defined in the 'buffer' variable, which by default is measured in pixels. So the combination of

This method of positioning can be particularly useful when labeling a figure that includes many subplots that share a common color scheme, where the "best" location for a legend is not necessarily within the bounds of an axis. Unlike the legend command, the axes in the figure are never resized (and it is up to the user to check that the legend fits on the figure in the specified location). In addition to being easier than manually positioning a legend, this function updates the legend location when the figure is resized, preserving the desired alignment. The following anchor/buffer combinations, when used with the default reference and a buffer unit of pixels, approximately replicate the typical legend locations:

This code can be downloaded from Github or the MatlabCentral File Exchange. The File Exchange entry is updated daily from the GitHub repository.

The following folders need to be added to your Matlab Search path (via addpath, pathtool, etc.):

In addition to these legendflex-specific parameters, this function will accept any parameter accepted by the original legend function (e.g. font properties) except 'location', 'boxon', 'boxoff', or 'hide'.

First, let's create a subplot with 10 lines, 5 solid and 5 dashed, which cycle through 5 colors: 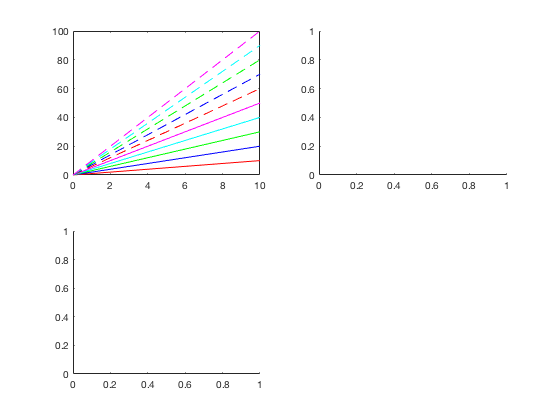 Now add a legend in the upper left corner, with the entries arranged in a 4 x 3 grid so it doesn't interfere with the data. We've also decreased the horizontal space used by each legend line: 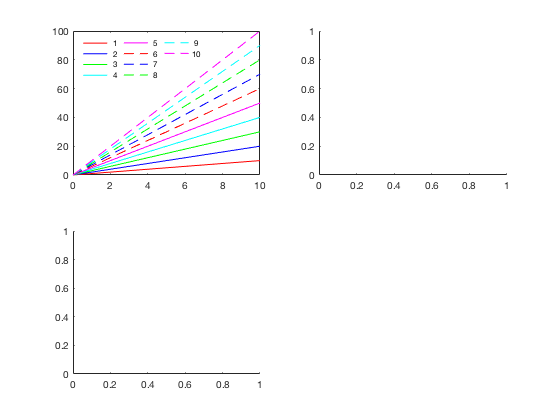 Plot the same lines in the second subplot. But this time, let's add two legends: one for color, and one for line style. Note that in this case, the second legend is positioned relative to the first, rather than relative to the axis itself: 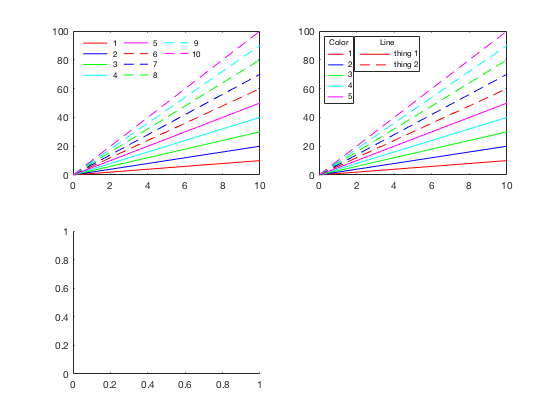 Our final subplot simply shows that this function will handle all object types. We plot a contourf plot overlaid with a quiver plot, and label both above the subplot axis.

Well, almost any graphics object. In 2014b, there are some rendering bugs when legend is called with multiple outputs that can cause weird stuff to happen when labeling contour objects; these sorts of issues may continue as the Mathworks updates their graphics further. 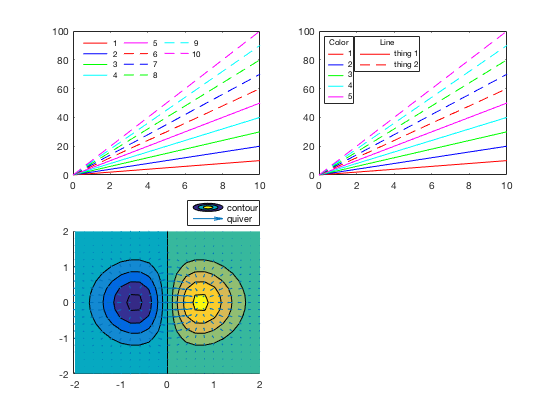 A note on legendflex with LateX

Unfortunately, the Latex renderer doesn't play very nicely with legendflex. It's something that bugs me in my own work too, but I've never been able to come up with a good workaround that would position things properly. The legendflex function repositions everything using the 'Extent' property of all the text in the original legend. However, the extent property of latex-rendered text doesn't always match up with the actual space taken up by the text... not quite sure why this is, and therefore I don't have a reliable way to calculate what that real space is.

Here's an example using plain text objects. Ideally, the red boxes would surround each text object, but in the Latex case, the Extent often leaves space above or below, or practically overlaps the text. 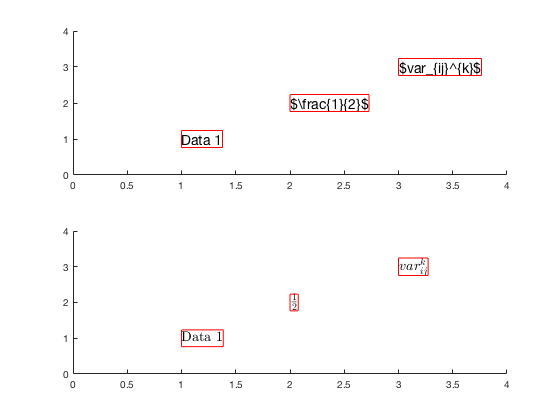 Becuase of this, you really need to play around with properties (like padding) in order to get a legendflex legend that uses latex and looks decent. Sometimes generating the legend first, then setting the latex rendering afterwards will help a bit. Other times I generate the legend using a larger font size, then shrink the text back down after it's been positioned. None of these hacks are ideal, but they're the best I've been able to come up with.

Community contributions to this package are welcome!

To report bugs, please submit an issue on GitHub and include:

I do monitor the MatlabCentral FileExchange entry for any issues raised in the comments, but would prefer to track issues on GitHub.

Created with R2010a
Compatible with any release

Versions that use the GitHub default branch cannot be downloaded