This document presents a SimBiology model characterizing the pharmacokinetic /pharmacodynamic (PK/PD) behavior of anticancer agents as described in the article, “Predictive Pharmacokinetic-Pharmacodynamic Modeling of Tumor Growth Kinetics in Xenograft Models after Administration of Anticancer Agents” by Simeoni et al.

In 2004, Simeoni et al [1] proposed a PK/PD model to quantify the effect of anticancer drugs on tumor growth kinetics from in vivo animal studies. The drug pharmacokinetics were described by a 2-compartment model with bolus IV dosing and linear elimination (ke) from the Central compartment. Tumor growth was described as a biphasic process with an initial exponential growth followed by linear growth. The growth rate of the proliferating tumor cells, x1, was described by: 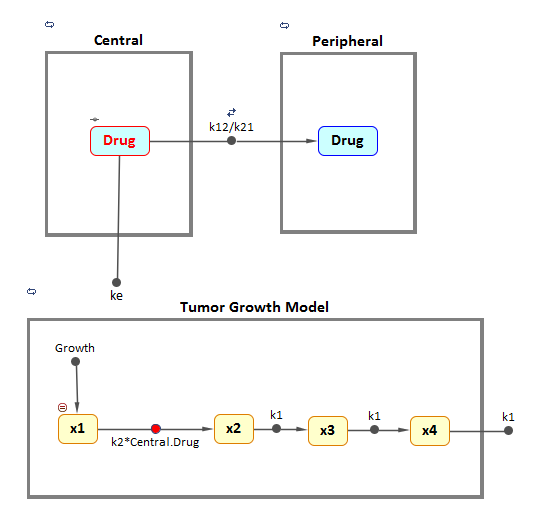