Use MATLAB to develop machine learning and deep learning algorithms that use historical load measurements, outside temperatures, and other data to predict hour-by-hour demand

“Before starting this project, we had no experience with AI and little experience with programming in MATLAB. Machine learning and deep learning are complex topics, but MATLAB made the project straightforward for us with toolboxes that are easy to learn and use.” 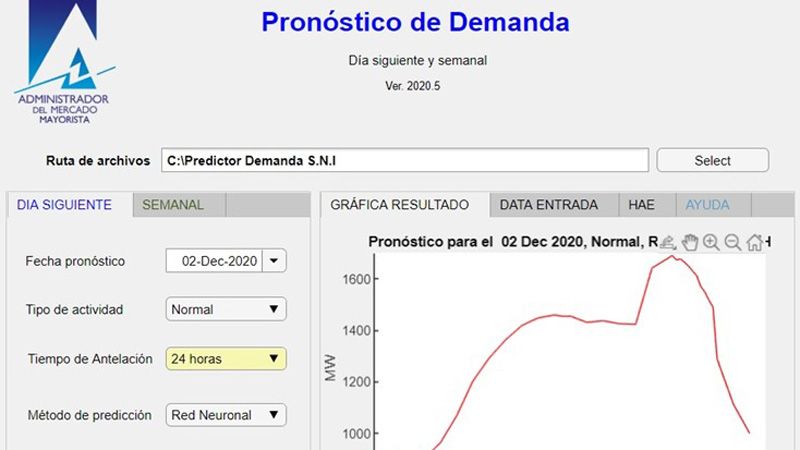 The Administrador del Mercado Mayorista (AMM) in Guatemala is responsible for operating the national grid and for administering the country’s wholesale electricity market. To fulfill these responsibilities, AMM must have accurate hour-by-hour predictions of electricity demand.

AMM recently created a tool in MATLAB® that uses deep learning and machine learning models to predict short-term electricity demand. Despite having no prior experience with AI, a small team of AMM engineers completed development in just 6 months. The tool has enabled AMM to reduce prediction error by more than 50%.

“The versatility of MATLAB and the ease with which we could use MATLAB toolboxes for machine learning and deep learning to solve complex issues were key advantages for our team,” says a lead engineer at AMM. “With this new tool we’ll be able to maximize hydroelectric resources, optimize the use of reserves, and minimize costly payments to international energy exchanges.”

In the past, AMM predicted demand by performing a mathematical regression based on historical data. This approach was labor-intensive and did not take the effects of ambient temperature into account. Since even a two-degree shift in ambient temperature can change demand by up to 150 MW, day-to-day weather changes reduced the accuracy of the demand forecast considerably.

AMM wanted to apply machine learning or deep learning models that could predict demand based on both historical demand and other factors, such as the weather forecast. They needed to evaluate a variety of model types to find the ones that would work best with their data. The prediction models would need to be deployed as a standalone tool that was easy for analysts to use.

AMM engineers started by reviewing a MathWorks webinar on electricity load and price forecasting (47:43) and exploring the example MATLAB code. Working in MATLAB, the team then cleaned and preprocessed hourly demand and temperature data for the past 17 years, removing outliers caused by blackouts and similar anomalies.

The team evaluated a wide range of machine learning models using Statistics and Machine Learning Toolbox™. They trained each model on a data set that included past demand, expected hour-by-hour temperatures, the position of the sun, and day of the week. After comparing results from the models, they selected a bagged decision tree for its training speed and accuracy in predicting hour-by-hour demand.

The team built an artificial neural network (ANN) using the Deep Network Designer app in Deep Learning Toolbox™. They trained the ANN using the data set they had used to train the bagged decision tree model. The engineers then compared the results produced by the network and by the model.

They found that, while the results were nearly equivalent, there were some situations in which one outperformed the other. For example, on major holidays or following abrupt temperature changes, the ANN performed better, whereas under nominal conditions, the machine learning model performed better. As a result, they decided to use both.

During the pandemic, the historical data provided less predictive value, since there was no history of lockdown measures. The team used holiday results to approximate demand until the model had enough data to work correctly.

The engineers created a graphical interface for the tool and packaged it with the ANN and the bagged decision tree model as a standalone application.