Design a guidance, navigation, and control system that could land an unpowered, unpiloted, reusable spacecraft on a standard runway

"I am very pleased with the results of this flight test. It is a significant step in the development phase." 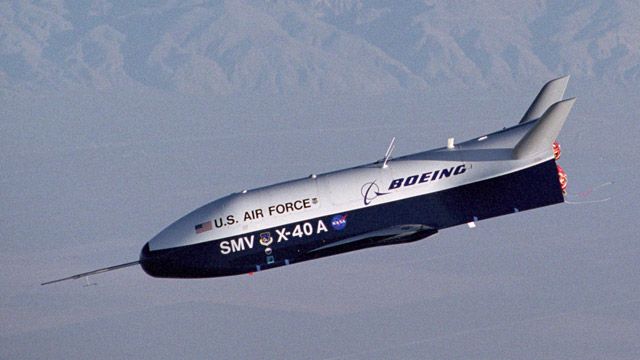 The X-40A is a 90% scale reusable experimental space vehicle, a prototype for a new generation of highly maneuverable spacecraft that will perform tasks such as satellite deployments, surveillance, logistics, and Space Station support.

Key to the success of the X-40A was a guidance, navigation, and control (GN&C) system designed and modeled using tools from MathWorks.

A small group of engineers at Boeing was tasked with designing a GN&C system that would allow the X-40A to land and come to a full stop on a standard runway without either power or a pilot. The project had to be completed within strict time, funding, and resource limits. The software needed to be reusable in operational SMVs.

The X-40A has a 22-foot-long fuselage, a 12-foot wingspan, and a weight of about 2600 pounds. It is guided by the control surfaces on the wings, which perform roll and braking functionality, and those on the tail, which control pitch and yaw. There is no propulsion system, and the vehicle must be lifted to its maneuvering position.

The team needed to develop, model, and simulate flight-control laws for the X-40A and then test them in real-life drop tests. The flight-control laws needed to be flexible enough to adjust to any changes made to the vehicle’s design during the development cycle. Lateral and directional control laws had to provide feedback for the roll and yaw rates that would permit the bank-to-turn command for runway centerline steering. The longitudinal control laws had to provide feedback for the pitch rates that would enable the command for flight path tracking.

This project also involved prototyping software for avionics, sensors, actuators, and controllers and validating the software development metrics and processes.

The engineers used Simulink and the MATLAB toolboxes to create, block-­diagram, and simulation-test the flight-control laws. Simulink Coder was used to automatically generate C code for the GN&C system. They then modified an independent Fortran simulation of the Space Shuttle autoland algorithm to fit the X-40A configuration. Finally, they validated the C and Fortran codes against each other until the results matched identically.

The initial implementation of the GN&C took six weeks—two weeks for the Simulink modeling and four weeks for the unit testing. Each subsequent update, including verification and analysis, took one week.