Develop a solar-powered aircraft capable of circumnavigating the globe

Use MATLAB and Simulink to create system models for trade studies and design tradeoff analysis, and aircraft dynamics models for high-fidelity simulations and pilot training

“Simulations with MATLAB and Simulink were essential to assessing feasibility and evaluating broad design tradeoffs as well as making detailed design decisions—like the size of control surfaces and the vertical tail—that directly affect aircraft dynamics and handling qualities.”

Solar Impulse aims to promote the use of renewable energy by building an aircraft capable of circumnavigating the globe using only solar power. The Solar Impulse HB-SIA prototype took the first step toward that goal when it flew nonstop for more than 26 hours, powered only by solar energy and producing no polluting emissions. Lessons learned from the HB-SIA are being applied to the HB-SIB aircraft, which Solar Impulse plans to use for its round-the-world flight in 2015.

Solar Impulse engineers used MATLAB® and Simulink® to conduct advanced trade studies in which they evaluated design tradeoffs and identified critical technology parameters. They used MATLAB and Simulink during the design and construction of the HB-SIA prototype to model and simulate aircraft dynamics and produce a flight simulator for pilot training.

“MATLAB and Simulink enable us to concentrate on high-level modeling and analysis instead of building up tool chains or writing low-level code,” says Ralph Paul, head of flight dynamics and flight test at Solar Impulse. “They give us the ability to prototype and iterate quickly, which is essential on first-of-its-kind projects like Solar Impulse.”

When the Solar Impulse project began, no one knew whether a solar-powered aircraft capable of flying day and night could be built using available technologies. The first challenge was to analyze key factors, including solar cell efficiency, battery performance, wingspan, and weight, and perform tradeoff analysis to balance gathering solar energy and maintaining aerodynamic efficiency.

Initial trade studies focused on performance over a period of hours, but analysis on a much shorter timescale was needed to evaluate flight mechanics, aerodynamics, and flying qualities. Design and construction of the HB-SIA prototype depended on accurate simulations of the aircraft. So, too, did the Solar Impulse test pilots, who needed a flight simulator that replicated the handling qualities and flight dynamics of the Solar Impulse aircraft. 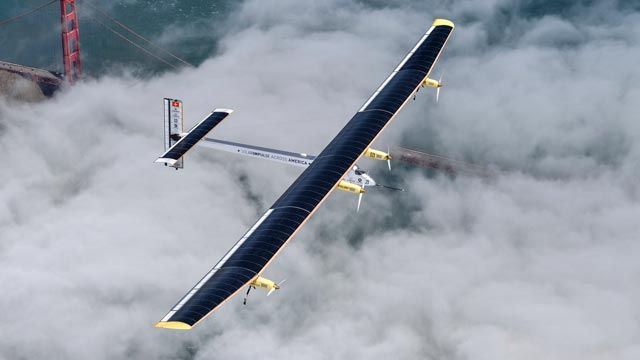 Solar Impulse engineers used MATLAB and Simulink throughout the study, design, development, and mission planning stages of the HB-SIA prototype.

They used Simulink to create a system model of the aircraft, its structural properties, and its critical subsystems, including the lithium polymer batteries. Early simulations with this model indicated that the area needed for solar cells would require 80-meter wings; the team simulated and evaluated tradeoffs to identify optimal design parameters, enabling a 64-meter wingspan.

The engineers then modeled the aircraft dynamics in Simulink, including its aerodynamic properties, mechanical control systems, electric motors, propellers, and gearbox. Simulations helped the team validate and fine-tune the design.

To create a flight simulator for the HB-SIA, the team extended the aircraft dynamics model, adding S-functions to accept pilot controls and an X-Plane interface for visual feedback.

The team used MATLAB to develop algorithms for the onboard air data computer, which computes air speed and altitude based on pressure sensor data. MATLAB was also used to prototype algorithms for the Omega instrument, which reports the aircraft’s bank angle and flight direction accurate to one degree.