“It was technically impossible for us to build a full-scale hydraulic system model to run in real time without Simulink, Simscape, and Simulink Real-Time. Our simulator enables us to test new concepts for construction equipment, tune parameters, reduce lead times, and minimize issues in the field.” 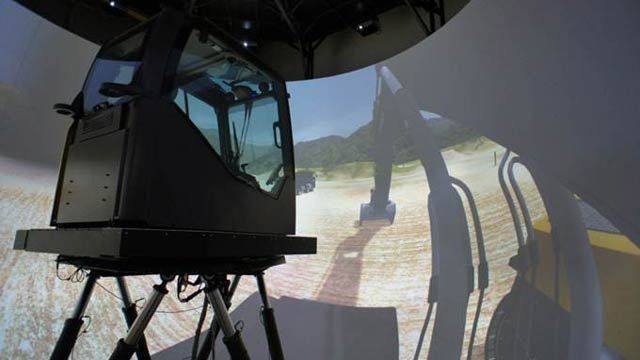 When designing excavators, wheel loaders, haulers, and other construction equipment, engineers develop prototype versions of the machinery to evaluate performance, responsiveness, and operability. Building physical prototypes costs manufacturers millions of dollars and months of development time. Until recently, however, this was the only way to effectively understand the experience of operating a new machine.

“With Simscape and Simulink Real-Time we can simulate not only fuel economy and performance but also the feel of operating the machine—all before we build a physical prototype,” says Jae Yong Lee, Chief Engineer at Volvo CE. “Evaluating operator experience through simulation is vital to making trade­off decisions in the early stages of product development.”

Volvo construction machines rely on sophisticated hydraulic systems comprising numerous valves, pumps, and pipes, as well as a control system and various sensors. These hydraulic systems must be matched with an appropriately sized engine and then optimized for performance and fuel economy by tuning controller parameters.

Volvo engineers knew that this complex task would be too costly to perform on physical prototypes, but they lacked a way to accurately simulate hydraulics in real time. Further, domain-specific simulation tools would enable them to simulate only individual subsystems, making it impossible to develop a full-scale simulator of a complete machine incorporating hydraulic, mechanical, electrical, and electronic subsystems.

The team needed tools that would enable them to model all subsystems in a single environment and perform real-time simulations of the complete system. This approach would let them make informed design trade­off decisions that took into account not only performance and efficiency but also feedback from the operator driving the machine. A modeling and simulation environment that supported multiple domains was also essential to the company’s concurrent engineering approach, in which teams develop various subsystems of the final product in parallel and then converge on an optimal solution.

Volvo CE engineers selected Simulink, Simscape, and Simulink Real-Time for the development of the VMS platform.

The team modeled the main control valve, relief valves, swing motor, and hydraulic circuits of the first machine to be simulated—an excavator—with Simscape Fluids™ and Simscape. They then modeled the mechanical components, including the boom, arm, and bucket, with Simscape Multibody™.

Working in Simulink, the team created an engine model and then integrated it with the hydraulic, mechanical, and other subsystem models to create a model of the complete machine.

Using Simulink and Simulink Control Design™, they developed a controller model and performed closed-loop simulations with the machine model. They used MATLAB® to postprocess simulation results. They then refined the controller design based on their analysis of system behavior in simulation, and verified the machine model with test data from an actual machine.

They generated C code from their models using Simulink Coder™, and used Simulink Real-Time to run the code concurrently on three target PCs from Speedgoat.

The real-time simulation platform is currently in use for excavator product development, and the company plans to use it to develop wheel loaders and articulated haulers, as well. The team recently added controller-in-the-loop and rapid control prototyping capabilities to the simulator to support software development and testing.