per isakson on 6 Feb 2012
⋮
Edited: Walter Roberson on 24 May 2021
Last month, 2020-10-03, I uploaded
m2uml 2.0,
which is a complete rewrite. (It generates UML class diagrams from m-code.)
=====================================
Answer 2 on 2012-03-10:
Answer 2 on 2012-03-07: I replaced the diagram. The possibilities to control the layout are limited. How much control is needed?
Answer 2 on 2012-02-29: What characteristics of a UML sketching and documentation tool are required to make it useful in the design and programming process?
Answer 1 on 2012-02-24: I have started to make a tool.
Question on 2012-02-12: Does it exist a tool to automatically generate UML-diagrams from Matlab m-code? If not I plan to make a simple tool.
=====================================
I want an automatic tool to generate UML diagrams from MATLAB code. Thus, I ask for your comments on the following idea. Is is worth to try? Is there already such a tool for MATLAB? There are for other languages.
Currently, I sporadically use the interactive tool UMLet, which is really easy to use. However, I don't update the diagrams when I make changes to my MATLAB-code.
The idea is to put together a tool that consists of three parts
I have looked at the three open source tools, TextUML, UMLGraph and PlantUML. I have experimented a bit with PlantUML and picked that.
I hope to get something working in a short time. However, there is a tool, PlantUML Dependency, which creates code for PlantUML from Java-code. It's many lines of code!
There are a number of contributions in the File Exchange. I'll study them.
Here is a list of the tools that I've found.
Maybe, The Mathworks has a tool that can be contributed to the File Exchange. However, I assume that this UML Class Diagram is not generated automatically.

⋮
Have you made any progress on this?

⋮
Thank you for asking. I have a little tool, m2uml, which I use on a regular basis.
I don't think it worth trying to do anything automatically with Sequence Diagrams. The info needed is provided by my function, trace4m. However, in real world cases the diagram explodes in size. The text output is good enough for understanding how existing code behaves.
I use PlantUML to make some sequence diagrams to support design decisions.
I'm positive that using some simple UML-diagrams helps make better Matlab programs as argued by Martin Fowler, UmlAsSketch

⋮
Hi Per, thank you for posting your thoughts and plan of action! I agree with you 100%, Matlab definitely needs a UML tool so that users can benefit from proper visualization of O-O designs.
Would you mind please updating us on your progress over the last year? Thank you in advance, and good luck with the project :)

⋮
Very nice, Per Isakson!
I hope you all will be glad to learn that with R2021a MATLAB now ships a Class Diagram Viewer. 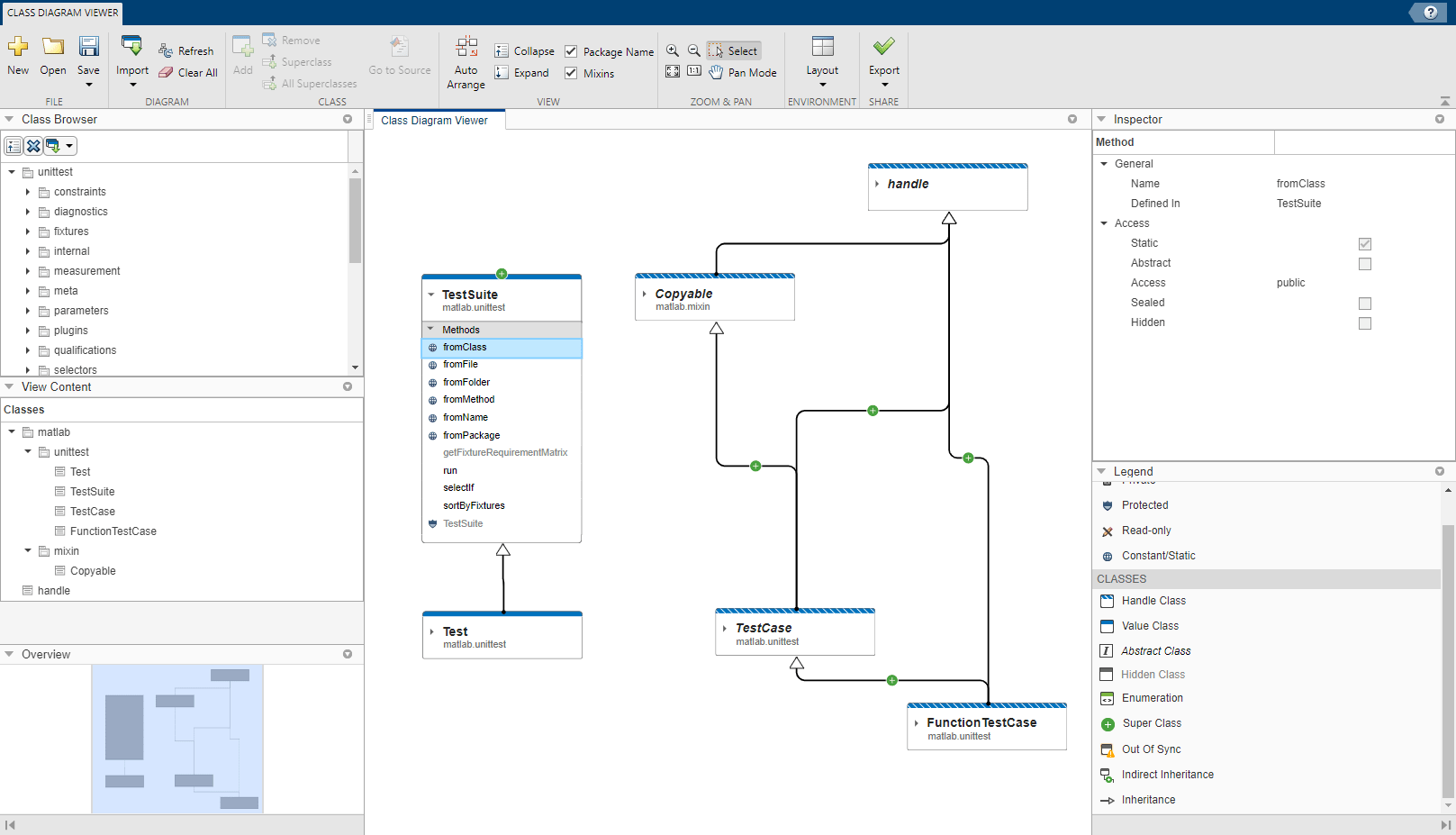 per isakson on 24 Feb 2012
⋮
I've done some experiments with PlantUML+Graphviz. My Matlab tool automatically generates PlantUML-code based on the m-files. This class diagram is based on the classes, which are provided in the FEX-contribution "Class Inheritance Browser". (I can use some advise on including pictures.)
UML diagrams can include a lot of detail. How much detail is useful? How do I extract the needed information from the Matlab-code? I know of meta.class.fromname, profile('info'), evalc( 'mlint( ''-calls'', filespec )' ); and my tracer4m.
Is it a good idea to write "UML-code" in the comments of the m-files for this tool to read? Is there a "language" that I could borrow from? (V) in the diagram stands for value-class.
UML-diagrams for real programs easily becomes so huge and cluttered that they are useless. Would it be a good idea to include "UML-code" in comments of the m-files, based om which it is possible to filter the diagram, e.g conditionally exclude unimportant classes?
I need help to make a useful tool and FEX-contribution!

⋮
The Taxi class has two sets of properties and methods. I have to find out why!

⋮
And inherits twice from Car

per isakson on 29 Feb 2012
⋮
2010-03-07: I replaced the diagram. (S) stands for Singleton.
================
I incude a Class Diagram that I just generated automatically. It shows some classes from an experiment I did last year. The red square in ICE_waitbar indicates that it is a singleton; the constructor is private. The last thing I did was to suppress displaying of inherited properties and methods. (H) stands for inheritance from the handle class. I don't want a separate box for the handle class.
The associations between State and IceProxy looks a bit strange. (I cannot do much to the crossing arrows!)
Now, I'm need to think about the requirements. What would be useful and what not. Goals:
Would it be a good idea to include "significant comments" in the comments of the Matlab source code? That is to say short strings preceded by some special character, e.g. "¤". For example, I thought about the codes "¤L1", "¤L2" and "¤L3" (level 1,2 and 3) to use a bit like outline view in Ms Word. A class at level, L3, would not be included in an overview. From there it is easy to envision a set of keywords forming a kind of language. Multiplicity might be specified with a "significant comment"
-