Plot contours from coordinates as a line

Guillaume Le Goc on 18 May 2020
⋮
Commented: darova on 18 May 2020
Hey there, I'm struggling with a problem regarding plotting a shape directly from x,y coordinates.
I have a set of (x,y) coordinates of points that describes several contours in the (x, y) plane.
I can display those contours using :
scatter(x, y)
The problem using this function is that the figure is quite heavy, and exporting it to pdf for, say, editing it on Inkscape results in a vector image with a weight of more than 10MB that Inkscape has troubles handling. Note that the coordinates contain more than 2000 (x,y) pairs.
The solution would be to plot those contours as a line rather with discrete points, but I don't find a way.
The two issues I get that make impossible to use plot rather than scatter is that :
I guess I could achieve something with the contour or surf functions, setting a fake z dimension that would describe the contours but I didn't manage...
Any insights? You'll find attached an example of two objects whose contours are described by their x,y coordinates.
Cheers,
Guillaume

⋮
I didn't know this function, it could have worked but it simplifiestoo much some complex shape and doesn't really work when there is two objects. 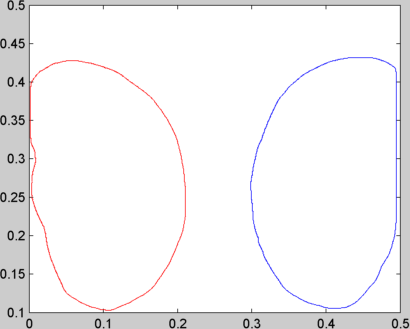 ⋮
That's clever, nice one!
But unfortunately I have several sets of coordinates such as this one, and I wanted an unsupervised way (ie. with no knowledge of number of regions, where to threshold...). I guess it's feasible to build something that automates this but I don't really have time and it's kinda okay the way it is with scatter. I thought maybe MATLAB could do this "natively".