⋮
yeah..that could be done...but what if I want to use ode15i...updating peristent values is providing some different results.........any other method to do so?

⋮
As others have said, ode15i may decide to reject a step and so evaluate your function at an earlier time than the one in which your persistent variables were set. Therefore your approach could lead to incorrect results.
Show us the mathematical equations and we'll see if ode15i is the right tool for this job. I suspect it is not. 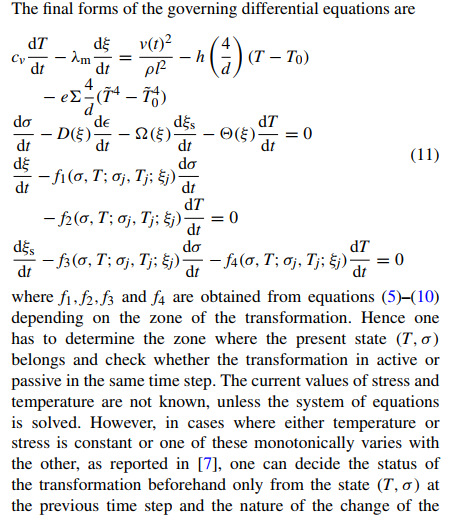 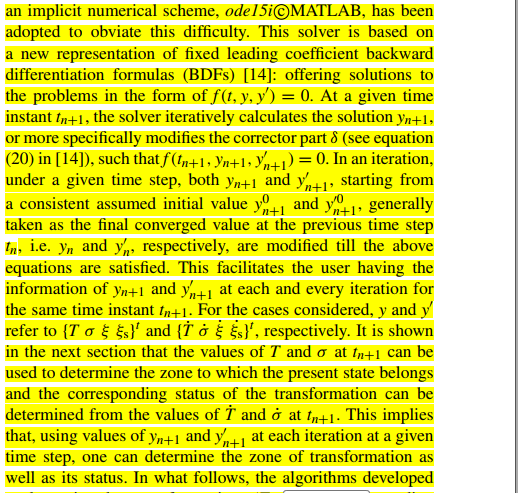 ⋮
Good, now we are getting there. What still remains unclear is "zone" and "transformation" what are these two refering too. Different ranges of temperature and stress makes up different zones? If so you should have a look at how matlab handles events for ode-functions - I usually look at ballode to see how that's done.

⋮
We can continue guessing. What are the differences between your zones? Does your functions f_i vary in some unknown or in some known way between zones? If you know that you should be able to work out how to combine the implementation of those functions for the different zones and have any of the ode-functions respect the transitions if you use the events handling that they are capable of. Good luck.

Walter Roberson on 12 Oct 2020
⋮
but what if I want to use ode15i
https://www.mathworks.com/help/matlab/ref/ode15i.html
ode15i is a variable-step, variable-order (VSVO) solver based on the backward differentiation formulas (BDFs) of orders 1 to 5.
Variable step algorithms do not just pick a step size, calculate the function at (current plus step) and multiply the returned derivatives by the step size to determine the next location.
Variable step algorithms also evaluate at a series of carefully chosen additional points and make predictions based upon some of the locations and and other predictions based upon a different subset of the locations, and cross-check the predictions. Then if the values changed too much or if the predictions do not match each other well enough, then the step attempt is rejected, and a smaller step is attempted, and on and on until eventually either a small enough step is accepted or else the algorithm reaches the lower limit on step size and rejects the system of equations as being discontinuous.
Because of this "evaluate multiple times at different locations" together with "reject steps", then you can never count on function values remembered from a previous call: the previous call might have been a different one of the carefully chosen points from the current series, or might have been from a rejected attempt.
If your system cannot be represented with one of the DDE solvers, then you are probably going to have to switch to a fixed-step solver and figure out the number of control points per iteration in order to know how many previous values to remember.

⋮
"what are the other methods to resolve this issue?"
You could try my answer.

⋮
"This is not working"
If you want further help then you need to show exactly what you are doing, explain what you expect, and describe what actually occurs. Writing "is not working" does not give me any information to help you.

⋮
the updated value of sij etc..vanishes when second iteration starts...I am calling function in a loop...

⋮
You have to understand that the ODE-integrating functions take multiple steps from one point in time before getting to a next point in time. From your perspective you have to make the functions such that they provide the derivatives at a random time t without relying on what the previous call to the ODE-function was. Relying on presistent variable-values is not a robust way to do this.

⋮
Edited: Stephen23 on 12 Oct 2020
"the updated value of sij etc..vanishes when second iteration starts...I am calling function in a loop..."
Values do not just "disappear" from a workspace. If the values are defined in the parent workspace and you are calling a nested function in a loop then they should not (in general) disappear. Perhaps something you are doing makes them disappear: does any of your code call clear or anything similar?
By not uploading your actual function file/s you make it very difficult and slow for us to help you.
In any case, as Bjorn Gustavsson wrote, it is unlikely that relying on previous values will return anything sensible as all ODE solvers adjust the step sizes dynamically and some can even backtrack. This is very similar to a recurring discussion on this forum where someone imagines using some internal values after the ODE solving routine, but because they are sampled at non-evenly-spaced timepoints (unrelated to the requested sample times) and are not neccesarily sorted in time order either, they turn out to be quite non-trivial to use in practice.