Errors after converting project from 2019b to 2017a

Jérémi Graveline on 8 Dec 2020
⋮
Answered: Amrtanshu Raj on 24 Dec 2020
Accepted Answer: Amrtanshu Raj
Hello,
I had to downgrade a simulink project including matlab scripts from version 2019a to 2017b. The original version works fine, however, I get some odd errors when running the 2017b version.
The first error I faced when I ran the simulink model came from a called script file: 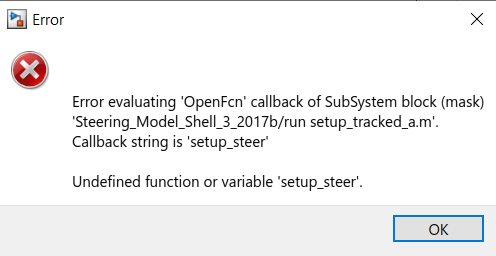 So I went into that setup_steer.m file and ran it:

I then verified the path and confirmed that it was right. So, I decided to replace the double brackets for single ones like this instead:
addpath('matGeom/matGeom/')
It solved the error, however, a new one appeared further away, a polyshape error:

Amrtanshu Raj on 24 Dec 2020
⋮
Hi,
The reason you are facing this issue is because the 'KeepCollinearPoints' Parameter for polyshape function was introduced after 2017b. You can check the polyshape 2017b and 2019b documentaion.