Measuring, calibrating, diagnosing, and flashing ECUs in one tool 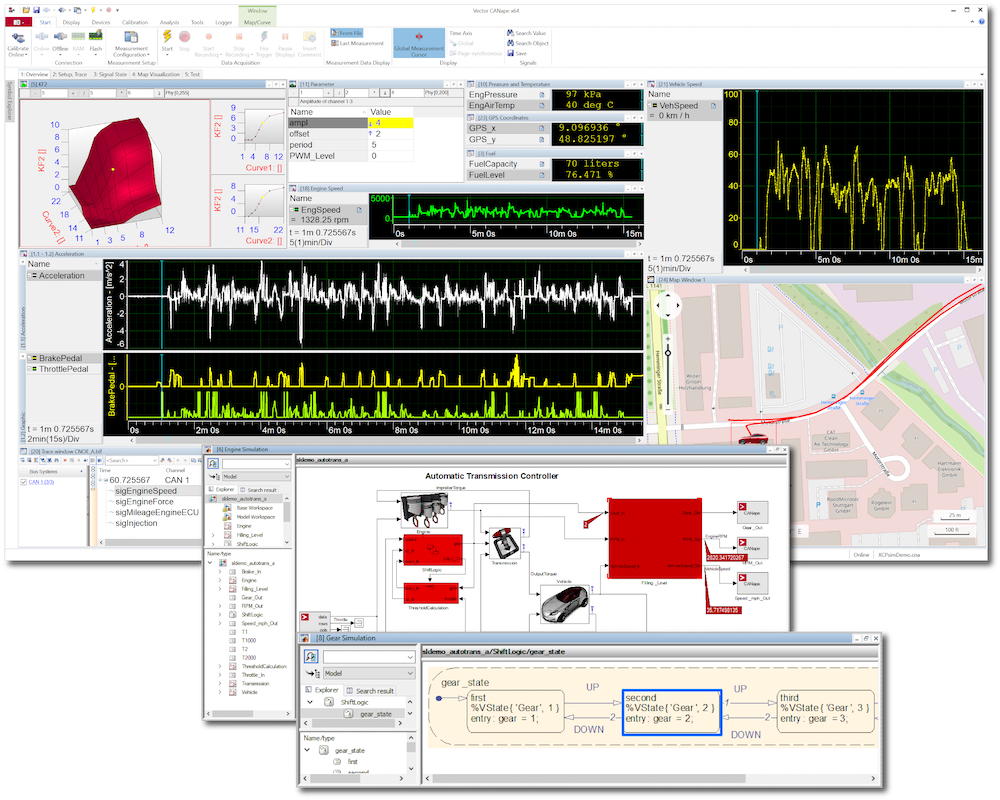 CANape® is primarily used in optimizing parameterization (calibration) of electronic control units (ECU). Calibrate parameter values and acquire measurement signals during system run time. The physical interface between CANape and the ECU might be made via the CAN bus with CCP, or via FlexRay® with XCP. As a result it has all relevant integrated functions for measurement, calibration, flashing, and diagnostics. Its reliance on standards makes CANape an open and flexible platform for all phases of ECU development.

CANape enables the use of standard PCs in place of cost-intensive rapid prototyping hardware. Functional development is performed by MATLAB® and Simulink®. After generating code using Simulink Coder™ and the compiler, the Simulink model can be run as DLL in CANape on any WIN32 computer. Even without Simulink Coder, existing code can be used via a supplied C++ project for DLL generation. XCP is then used to access all internal model measurement variables and parameters (including integrated binary components). To stimulate the algorithms, you can use both measurement values and the content of logged measurement files.

You can implement PC-based bypassing with the XCP mechanisms DAQ/STIM. This involves measuring input variables of the relevant ECU function via XCP. On the PC, the Simulink model is used to compute the output variables, which are time-synchronously transmitted back to the ECU by XCP stimulation. For short round trip times, the bypasses are computed on the Vector VN8900 network interface with integrated real-time computer, and measurement and stimulation access are computed using the VX1000 hardware.

You can use the Simulink Model Explorer to visualize the Simulink and Stateflow® model directly in CANape independent of the run time environment of the code. The link between the model and the A2L file lets you navigate through the model and access parameters and measured values directly.

The Simulink XCP Server option lets you use CANape as an interface to parameterize and visualize Simulink models. You can make parameter changes in CANape and transfer them to the model. At the model's run time, Simulink sends measured data from the model to CANape via the XCP on Ethernet protocol. You access parameters in Simulink as though the application were running in an ECU. Simulink models are computed slower or faster than in real time (dependent on their complexity and processing power). After the computation cycle, you can analyze the data in CANape, adjust model parameters in CANape, and then start the next computation cycle.