From the series: Solving ODEs in MATLAB

ODE45 is usually the function of choice among the ODE solvers. It compares methods of orders four and five to estimate error and determine step size. ODE45 is so accurate that its default behavior is to use its interpolant to provide results at intermediate points.

Related MATLAB code files can be downloaded from MATLAB Central

The most frequently used ODE solver in MATLAB and Simulink is ODE45. It is based on method published by British mathematicians JR Dormand and PJ Prince in 1980. The basic method is order five. The error correction uses a companion order four method.

The slope of tn is, first same as last left over from the previous successful step. Then there are five more slopes from function values at 1/5 h, 3/10h, 4/5h, 8/9h and then at tn plus 1. These six slopes, linear combinations of them, are used to produce yn plus 1.

The function is evaluated at tn plus 1 and yn plus 1 to get a seventh slope. And then linear combinations of these are used to produce the error estimate.

If we want to see the actual coefficients that are used, you can go into the code for ODE45. There's a table with the coefficients. Or you go to the Wikipedia page for the Dormand-Prince Method and there is the same coefficients.

Let's use ODE45 to compute e to the t. y prime is equal to y. We can ask for output by supplying an argument called tspan. Zero and steps of 0.1 to 1. If we supply that as the input argument to solve this differential equation and get the output at those points, we get that back as the output. And now here's the approximations to the solution to that differential equation at those points.

If we plot it, here's the solution at those points. And to see how accurate it is, we see that we're actually getting this result to nine digits. ODE45 is very accurate.

Let's look at step size choice on our problem with near singularity, is a quarter. y0 is close to 16. The differential equation is y prime is 2(a-t) y squared. We let ODE45 choose its own step size by indicating we just want to integrate from 0 to 1. We capture the output in t and y and plot it.

Now, here, there's a lot of points here, but this is misleading because ODE45, by default, is using the refine option. It's only actually evaluating the function at every fourth one of these points and then using the interpolant to fill in in between. So we actually need a little different plot here.

The big dots are more closely concentrated as we have to go around the curve. And then, as we get farther away from the singularity the step size increases. So this shows the high accuracy of ODE45 and the automatic step size choice in action. 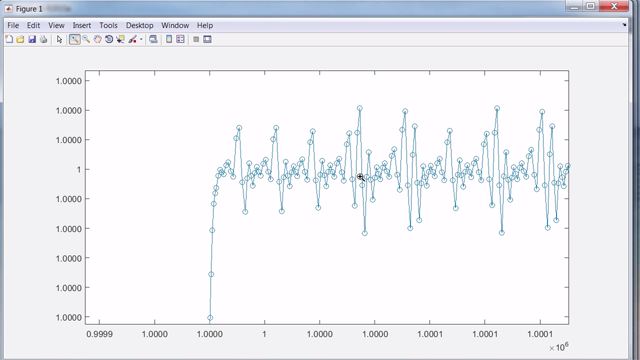